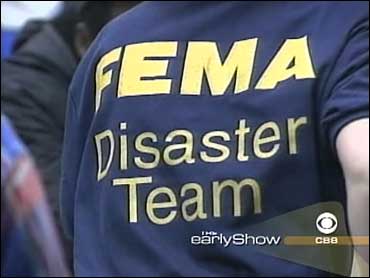 The new report by the Homeland Security Department's office of inspector general, set to be released later this week, examines the propriety of 36 trailer contracts designated for small and local businesses in the stricken Gulf Coast region following the 2005 storm.

It found a haphazard competitive bidding process in which the winning contract prices were both unreasonably low and high. Moreover, FEMA did not take adequate legal steps to ensure that companies were small and locally operated, resulting in a questionable contract award to a large firm with ties to the Republican Party.

"Based on our analysis, we concluded that FEMA contracting officials exposed the agency to an unacceptable level of risk," according to the report by the office of inspector general Richard Skinner.

The audit was requested by Sen. Byron Dorgan, D-N.D., chairman of the Democratic Policy Committee, following complaints last year by some small business owners that they were unfairly shut out of the contracting process. It is the latest to detail mismanagement in a multibillion-dollar hurricane recovery effort that investigators say has already wasted more than $1 billion.

The report also comes after FEMA acknowledged earlier this month that it would not have a federal plan ready for responding to emergencies before the approaching hurricane season, which begins June 1.

In response, FEMA in the report disagreed that the wide price variations put taxpayers at risk. The agency contended that it was comfortable with bidders' financial viability based in part on past performance. In cases where contract prices appeared unreasonably high, those would be offset with lower payments later on subsequent work orders, FEMA officials said.

Following heavy criticism, FEMA director David Paulison pledged to rebid those large contracts. He ultimately reopened only a portion, awarding 36 contracts which the agency said would be prioritized for small and local businesses.

Among the winners was joint venture PRI-DJI, which received $400 million worth of contracts. DJI stands for Del-Jen Inc., a subsidiary of Fluor, one of the original, no-bid winners which has donated more than $930,000 to mostly GOP candidates since 2000.

"It's not what you know, what your expertise is. I don't even believe it's got much to do with price. It's who you know," contended Ken Edmonds, owner of River Parish RV Inc. in Louisiana, a company of 9 people whose application was rejected.

In the audit, investigators said PRI-DJI was eligible to compete because DJI had partnered with PRI, a minority-owned firm based in San Diego, under a federal mentoring program offered by the Small Business Administration.

However, investigators found that PRI-DJI was given special preference even though it was not registered as a small business and "when neither company had its headquarters in Louisiana or Mississippi nor, in any other way, demonstrated that it had a history of working primarily in the impacted states."

Still, the audit noted the bid by PRI-DJI would likely have been selected anyway — without the special preference — because the price was so low.

Moreover, FEMA did not have formal criteria to determine whether a contractor should be considered local, did not require corroborating paperwork, and watered down requirements under federal law so that a company with only minimal Gulf Coast ties would be given special consideration, according to the audit.

Prices also varied greatly. Some were so high that investigators deemed them unreasonably excessive and wasteful; others were so unreasonably low that taxpayers faced "an unacceptable risk of poor performance."