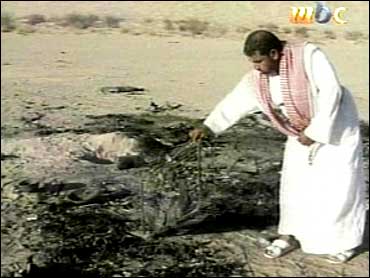 Opening up a new front in the war on terror, U.S. forces launched a pinpoint missile strike in Yemen, killing a top al Qaeda operative in his car in the first such overt attack outside of Afghanistan, a U.S. official said.

The strike, conducted by a CIA drone aircraft, killed Qaed Salim Sinan al-Harethi, the official said, speaking on condition of anonymity. U.S. counterterrorism officials say al-Harethi was al Qaeda's chief operative in Yemen and a suspect in the October 2000 bombing of the destroyer USS Cole.

CBS News Correspondent David Martin reports that this is perhaps the biggest success in the war against terrorism since the arrest of Ramzi bin-Alshihb, one of the planners of the Sept. 11 attacks, seven weeks ago in Pakistan.

At the Pentagon on Tuesday, Deputy Defense Secretary Paul Wolfowitz appeared to confirm that the attack was a U.S. operation. In a broadcast interview, he called it "a very successful tactical operation" and said such strikes are useful not only in killing terrorists but in forcing al Qaeda to change its tactics.

The attack occurred in the northern province of Marib, about 100 miles east of Yemen's capital San`a, where al Qaeda is considered active.

The official Yemeni news agency, local tribesmen and the U.S. official confirmed the strike killed al-Harethi. Witnesses said they saw an aircraft, possibly a helicopter, in the area. Hellfires can also be launched by attack helicopters and are used by both the U.S. Army and Marine Corps.

U.S. counterterrorism officials have said al-Harethi, also known as Abu Ali, was a top target of their efforts. He was a close associate of Osama bin Laden in Sudan in the early 1990s. Saudi fugitive Bin Laden, blamed for the Sept. 11 attacks, relocated to Afghanistan in 1996.

Speaking Monday about al-Harethi, Defense Secretary Donald H. Rumsfeld told reporters, "It would be a very good thing if he were out of business." The CIA declined comment on reports of his death, and President Bush ignored a question about the attack after he voted Tuesday in Crawford, Texas.

Al-Harethi was among hundreds of former fighters who returned to Yemen in the 1990s from Afghanistan, where some fought alongside bin Laden against the Soviet army.

Yemeni officials say al-Harethi went into hiding in 2001 after learning he was wanted for questioning by U.S. investigators in the Cole bombing.

Between August and November of last year, al-Harethi spent months in Hosun al-Jalal, a poor village in Yemen's Marib province, a region populated by gun-toting tribesmen where government forces venture only with the permission of local chiefs.

Al-Harethi lived in the village along with Mohammed Hamdi al-Ahdal, another al Qaeda suspect wanted in the Cole attack.

A Yemeni security official, speaking on condition of anonymity, said intelligence agents had al-Harethi's farm under surveillance for months and relayed information to U.S. forces.

Yemen, bin Laden's ancestral home, has become a haven for some al Qaeda operatives fleeing the war in Afghanistan.

According to Martin, for months the CIA has been operating its predator drone over Yemen and the Pentagon has kept 800 U.S. commandos standing by in Djibouti, the tiny African nation facing Yemen across the Gulf of Aden, waiting for a chance to kill or capture Abu Ali and other al Qaeda operatives known to be in Yemen.

400 marines will soon be added to the forces in Djibouti as the Pentagon sets up a special task force for hunting al Qaeda throughout the horn of Africa.

In the spring, hundreds of U.S. troops were deployed to Djibouti, officials said. The Marine amphibious assault ship USS Nassau recently replaced the USS Belleau Wood in the waters between the two nations.

Among other targets in Yemen are Shaykh Dabwan and Suwaid, described as al Qaeda operatives who plan and provide support to terror operations, and an al Qaeda communications expert known as Miqdad, said a U.S. defense official, speaking on condition of anonymity.

He is believed to have directed from afar the attack on the USS Cole, when two suicide bombers slammed an explosives-laden boat into the hull of the ship at the port of Aden, Yemen, killing 17 U.S. sailors and disabling the vessel.

U.S. intelligence also believes Yemeni-based terrorists linked to al Qaeda conducted an Oct. 6 attack the French oil tanker Limburg. A small boat crashed into the ship and exploded, killing a crewman, blowing a hole in the Limburg's hull and spilling 90,000 barrels of oil into the Gulf of Aden.

Since the Sept. 11 attacks on the United States, the CIA has used remotely operated Predators to make pinpoint strikes on al Qaeda leaders and conduct reconnaissance.

Mohammed Atef, bin Laden's military chief and a Sept. 11 organizer, was killed in November near Kabul in a joint airstrike by a Predator and U.S. military aircraft.

A Predator targeted Taliban leader Mullah Mohammed Omar at the start of the war on Afghanistan, but military lawyers could not decide whether he could be struck, officials have said. Its missiles were ultimately fired near him, but not to kill him.

In May, a CIA Predator attacked Afghan warlord Gulbuddin Hekmatyar near Kabul, missing him but killing some followers. Hekmatyar had offered rewards for those who killed U.S. troops. The former Afghan prime minister is said by U.S. counterterrorism officials to be loosely associated with al Qaeda.