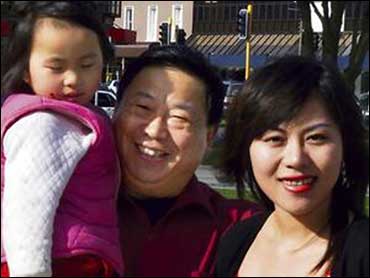 A three-country search for the parents of a 3-year-old girl abandoned at an Australia train station became a murder investigation Thursday when police identified a body found in New Zealand as the toddler's mother.

The girl's father, Xue Naiyin, was the prime suspect, and a warrant for his arrest was sent through Interpol to the United States, where he reportedly fled several days ago.

New Zealand police on Thursday issued a murder and kidnapping warrant for Xue, the publisher of a local Chinese-language magazine, after pathologists identified the body found Wednesday in the trunk of his car as Anan Liu, his wife, police spokeswoman Noreen Hegarty said.

The warrant was sent to Interpol, which contacted authorities in the United States, she said.

The investigation was launched after Xue was captured on security camera video leaving his daughter, Qian Xun Xue, alone at a train station in Melbourne, Australia, on Saturday. He boarded a flight to Los Angeles shortly afterward.

The video of the toddler, looking scared and confused, topped television news bulletins and was front-page news in both New Zealand and Australia. Police began to fear for Liu's safety when she failed to come forward about her daughter.

The story of Qian comes amid worldwide news coverage of the disappearance during a family holiday in Portugal of 3-year-old British toddler Madeleine McCann, whose parents have been named as suspects.

Qian, nicknamed "Pumpkin" before she was identified by Australian officials who found her, was put into temporary foster care in the southern city of Melbourne, where she was reportedly having trouble sleeping and repeatedly asking for her mother.

Police investigators found a sordid family history in New Zealand, where the family has lived since 2002.

Xue, 54, a practitioner of the martial art of tai chi and a well-known figure in the ethnic Chinese community in Auckland, New Zealand's largest city, had a history of being violent, police said. Late last year, he was ordered by a court to stay away from his wife and daughter. Creditors said his company, Chinese Times One, owed them significant sums.

After starting searches of the family's house on Monday, police on Wednesday discovered a woman's body in the trunk of Xue's car, which had been parked in the street outside.

Preliminary findings of a post-mortem examination determined that the body was that of Liu, and that she had died "during a violent episode," police said in a statement. It did not give further details.

U.S. authorities said they were looking for Xue.

"We have a lot of information and right now it's just leads," Tom Hession of the U.S. Marshal Service told New Zealand's National Radio. "We don't have anything definitive, he could be anywhere."

Jason Lee, a spokesman for the Los Angeles Police Department, told National Radio that Xue had been placed in a nationwide "wanted" computer system, but cautioned it could take months to find him. "He could be anywhere, he could possibly be in another country," he said.

Liu Xiaoping has said she intends to travel to New Zealand and then Australia to try to take custody of Qian.

"What she is going through now has no doubt left scars on her heart," Liu Xiaoping told Australian Broadcasting Corp. radio.

New Zealand Police Commissioner Howard Broad defended investigators Thursday against widespread media criticism that they had waited too long to search the car in which Liu's body was found. Officers first went to the family home on Monday, but did not look inside the car until Wednesday.

Broad told Newstalk ZB radio that "had we entered the car without a search warrant, then we risked the evidence that could've been found in the car having been tainted and not being admissible in a court of law."