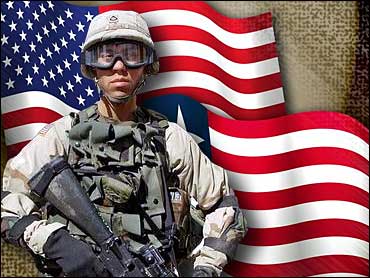 President Bush lamented the human suffering and unrest in Liberia, but stopped short Wednesday of saying whether his administration would send peacekeepers to the African nation — an idea opposed by a U.S. military already committed to other world trouble spots.

"The people are suffering there," Bush said. "The political instability is such that people are panicking ... but the good news is there's a cease-fire in place now."

Bush said Secretary of State Colin Powell would work closely with the United Nations to determine the best way to keep the cease-fire in place. He called again for Liberian President Charles Taylor to leave the country.

In an interview with CBS Radio, Taylor said he would be willing to leave within 90 days if a peaceful transition could be arranged. Though many say Taylor is not known to be a man of his word.

CBS News Correspondent David Martin reports one option President Bush is considering calls for sending about 700 soldiers, under the condition they would come out in a matter of months and be replaced a by U.N. peacekeeping force.

One State Department official also said the State had recommended last week that Bush send a small group of troops for a short time to help enforce the cease-fire. Top members of Bush's administration want to wrap up the issue by Thursday night — before the July 4 holiday starts, this official said.

Powell told a reporter Wednesday morning that Bush's top foreign policy advisers were expected to make their recommendations on Liberia to the president very soon.

The State Department spokesman, Richard Boucher, said as far as he knew no recommendations had been given to the president yet.

Powell talked by telephone to Annan twice on Tuesday, while the U.N. chief was traveling in Europe, and expects to talk to Annan again late Wednesday, Boucher said.

Secretary of Defense Donald H. Rumsfeld attended a White House meeting Wednesday morning on the issue after the National Security Council Tuesday failed to agree on a course of action in the West African nation, officials said.

Rumsfeld is opposed to international proposals that the United States send 2,000 troops to head 3,000 peacekeepers from various other African countries, a senior defense official said.

Still, Rumsfeld took with him to Wednesday's meeting a contingency plan for such a deployment, should the president order it. The Pentagon routinely works up and keeps on hand such plans for numerous problems around the world.

Another senior defense official stressed that no decision had been made and said a range of options was being considered — from sending no troops, to sending a small group of troops to protect the U.S. Embassy to sending the larger contingent of U.S. peacekeepers.

More than 10,000 American troops are still working in and around Afghanistan since the beginning of the global war on terror in September 2001 and nearly 150,000 troops are stationed in a violent and troubled postwar Iraq.

Defense officials say they are trying to avoid committing troops to Liberia as well.

But Martin reports, some say the U.S. has a special responsibility for Liberia since it was founded by freed American slaves in 1847. Britain and France recently sent troops to put down fighting in their former African colonies, and U.S. officials say they feel obliged to do the same for Liberia.

France, Britain and both sides in Liberia's fighting also have pushed for an American role in a peace force for the country.

Senior officials said Tuesday that no decision was imminent. But thousands of Liberians celebrated outside the U.S. Embassy in the Liberian capital of Monrovia late Tuesday as rumors spread about possible U.S. intervention.

One senior administration official said Bush was reluctant to send troops purely as peacekeepers. But if the troops were given a clear mission as part of a defined coalition, Bush might be more inclined, this official said, speaking on condition of anonymity.

Another administration official said the White House did not want to take the military option off the table for fear of making headlines just before Bush starts a trip to Africa next Monday.

Other U.S. politicians have also been weighing in the violence in Liberia.

Democratic presidential hopeful Howard Dean, who strongly opposed the war in Iraq, says U.S. troops should be sent to Liberia to avert a human rights catastrophe.

The former Vermont governor says a deployment of 2000 U.S. troops should be part of an international effort to stop the war between the government of President Charles Taylor and rebel forces.

Dean envisions that U.S. troops could stabilize the situation in Liberia and withdraw in several months, letting a U.N. peacekeeping mission take over at that point.

Dean calls the situation in Liberia exactly the opposite from that in Iraq before the war. He says there is an imminent threat of serious human catastrophe, prompting the world to ask the United States to exercise its leadership.

U.N. Secretary General Kofi Annan has suggested the United States take a leadership role in peacekeeping. West African leaders asked on Monday for 2,000 American troops to head a predominantly African force to stop the turmoil and keep the peace. The Africans said they want an answer before Bush leaves for the continent, but administration officials were noncommittal about whether they will have a response by then.

The current round of fighting in Liberia began three years ago as rebels began trying to oust President Charles Taylor, who won contested elections and took the presidency in 1997 after a 1989-96 civil war.

Fighting killed hundreds of trapped civilians in Monrovia just last month, and the war has displaced more than 1 million Liberians.

Because of the violence — but apart from the question of U.S. peacekeepers — several dozen U.S. Marines have for days been on standby at a Spanish military base in case they are needed as extra security at the U.S. Embassy in Monrovia or to evacuate Americans.