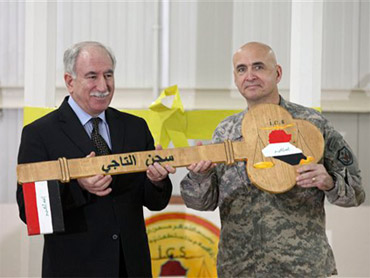 The U.S. military handed over control of a prison holding some 2,900 detainees to Iraqi authorities on Monday as the Americans move ahead with preparations for a full withdrawal by the end of 2011.

Most of the Taji prison's detainees are low and midlevel insurgents who were arrested by American troops, said Maj. Gen. David Quantock, commander of detainee operations. A small number have been convicted of crimes, he said.

Control of prisons is a sensitive issue for many Iraqis. Torture was widespread in Iraqi prisons under the regime for former dictator Saddam Hussein before his fall in the U.S.-led invasion in 2003. And the scandal following the release of photos showing American troops mistreating detainees in the Abu Ghraib prison sparked outrage across Iraq and the Arab world.

Taji was the second prison to be relinquished by the U.S. as it moves to release thousands of detainees or transfer them to Iraqi custody before the end of this year according to an agreement. Camp Bucca, an isolated desert prison that was once the largest lockup in Iraq, was closed in September.

That leaves only one prison in Iraq in American hands. The U.S. military said it plans a July 15 handover of Camp Cropper, which has held high-level detainees such as Saddam Hussein and members of his regime on the outskirts of Baghdad.

At the Iraqi government's request, the U.S. will continue to hold about 100 detainees who pose a high security risk, Quantock said, although he was not more specific about who would be kept in custody.

U.S. troops have detained some 90,000 Iraqis since the U.S.-led invasion that ousted Saddam in 2003, Quantock said, adding about 7,800 have been turned over to Iraqi authorities since the start of 2009.

American and Iraqi officials said the Taji prison, inside a large American military base of the same name 12 miles (20 kilometers) north of Baghdad, had been redesigned as a model prison for Iraq.

The $107 million facility can hold more than 5,000 prisoners and is equipped with medical, court and educational facilities, a carpentry shop and a brick factory, Quantock said. Its more than 2,100 person staff has been trained in human rights regulations and modern management techniques.

Iraqi Justice Minister Dara Noureddin described the hand over as a step toward Iraqi sovereignty and as a way for Iraqis to overcome past prison abuses.

He said the Iraqi government seeks "for these prisons to be real correctional facilities, not places for vengeance and torture as they were under the ousted dictatorial regime."

The handover ceremony at Taji occurred hours after a suicide car bomber killed four people and wounded 29 others when his vehicle exploded in a busy street during the morning rush hour in the Anbar province city of Fallujah, a former Sunni insurgent stronghold west of Baghdad.

The blast took place shortly before 9 a.m. near a central thoroughfare that was crowded with pedestrians, stalls selling tea and day laborers gathering for work, a Fallujah police officer said. He spoke on condition of anonymity because he was not authorized to talk to the media.

Dr. Abdul-Sattar Kadum, head of the Fallujah general hospital, confirmed the four fatalities and said that two of the wounded were in critical condition.

Nobody claimed responsibility for Monday's attack but it bore the hallmarks of al Qaeda in Iraq, which has threatened an uptick of violence in connection with March 7 parliamentary elections.

Allawi, a Shiite who has emerged as the main rival to Prime Minister Nouri al-Maliki in the vote, has been drawing on heavy Sunni support in his campaign, attracting Sunni voters frustrated with their own leaders who are also attracted to Allawi's nonsectarian stance and anti-Iran rhetoric.

Iraq's electoral commission was expected to release updated preliminary results from the voting in all 18 provinces later Monday, based on 60 percent of the returns. However, more delays were possible in the slow counting process that has been plagued by confusion and disarray.

Political parties are already jockeying for power and poised to negotiate new alliances to form the next government, which will lead the country as U.S. forces begin withdrawing ahead of a 2012 deadline.