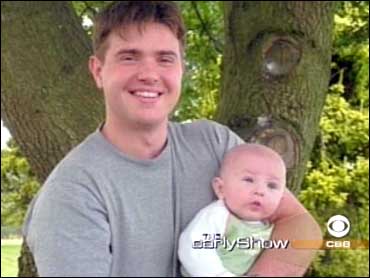 Boston-area police say a British man is a person of interest in the murders of his wife and baby daughter.

Investigators say Neil Entwistle left for England two days before the bodies were found, and now officials have traveled there to question him.

reports
, authorities aren't calling Neil a suspect in the shooting deaths of 27-year-old Rachel Entwistle and their 9-month-old daughter, Lillian.

But, they say, when they first spoke to Neil by phone, he already knew about the murders.

"We do know where he is," says Middlesex County District Attorney Martha Coakley, "and he has been available to us, and we have been able to reach him when we have wanted to."

Detectives in Massachusetts and England say they don't consider Neil a further flight risk, but would like to find out exactly why he left for England when he did.

The discovery of the bodies Sunday night still stuns family friends, such as Laurie Mahoney, who told Solorzano, "The three of them they were always so happy, every time they were around us. … It just doesn't make sense."

The Entwistles moved to Massachusetts from Neil's homeland last year, and into their house only days ago.

And while words of sympathy pour in to the Entwistle Web site, it's two other sites that are drawing attention, Solorzano says.

Neil, an out-of-work technology engineer, was allegedly involved with MillionMaker.net, which Solorzano describes as "an apparent get-rich scheme."

And pages of complaints on eBay claim the Entwistles never delivered on orders of computer software.