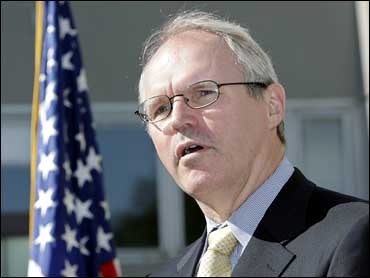 A senior U.S. diplomat said Tuesday that North Korea remains on a list of states that sponsor terrorism, dismissing North Korean claims that Washington has decided to remove the designation.

"No, they haven't been taken off the terrorism list," U.S. Assistant Secretary of State Christopher Hill told Japanese reporters as he arrived in Sydney, Australia, for a meeting of Pacific Rim nations. A State Department press officer separately confirmed the remarks.

Hill's comments were the first U.S. denial since North Korea's Foreign Ministry, in a statement carried Monday by the country's official news agency, said that Washington decided to scrap the terror designation and, with it, related economic sanctions.

The statement said the change came during a weekend meeting between Hill and his counterpart in Geneva.

Under a deal reached in February after years of tortuous negotiations, North Korea agreed to relinquish its nuclear programs, including one that has produced bomb material. In return, Washington agreed to open talks on normalizing relations with the North - its enemy since the Korean War - and to explore removing the terrorism designation.

Hill suggested that North Korea needs to go further in dismantling its nuclear programs before the U.S. will take it off the terrorism list.

"Getting off the list will depend on further de-nuclearization," Hill told reporters later Tuesday after a meeting with Japan's nuclear envoy, who was also in Sydney for a meeting of the Asia Pacific Economic Cooperation forum.

Hill declined to specify what North Korea must do, but said the issue has been discussed with North Korean officials. "They know what these steps are," Hill said.

After a slow start, the parties to the February agreement - the two Koreas, the U.S., China, Japan and Russia - have picked up speed in implementing its terms. North Korea shut down its main nuclear reactor in July.

After last weekend's Geneva meeting, Hill told reporters that North Korean envoy Kim Kye Gwan had agreed to disclose the country's nuclear programs and disable them by the end of this year.

Kim separately suggested that the North was willing to declare and dismantle the facilities, but it did not mention the year-end deadline.

North Korea has faced various economic sanctions since the 1950-53 Korean War. Washington put it on the terrorism list for its alleged involvement in the 1987 bombing of a South Korean airliner that killed 115 people.

The designation effectively blocks North Korea from receiving low-interest loans from the World Bank and other international lending agencies.

The administration of U.S. President George W. Bush believes the North cheated on an earlier nuclear deal, supposedly starting up a separate program to enrich uranium while freezing a plutonium-based program.

Under the February arrangement, Washington has tried to get North Korea to make major concessions on its nuclear programs before the U.S. and other parties make theirs.