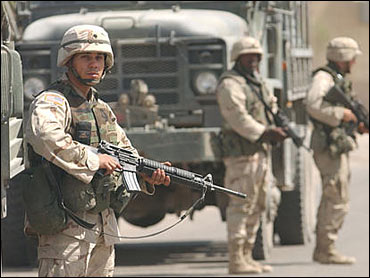 U.S. troops captured a group of men believed to include some of Saddam Hussein's bodyguards in a raid near the former leader's hometown, a senior Army general said Friday.

Five to 10 of the 13 people captured in the Thursday night raid near Tikrit are believed to be members of Saddam's personal security detail, Maj. Gen. Ray Odierno said. He said it was too early to tell if the guards had been with the deposed Iraqi leader after the fall of Baghdad or could help lead Americans to him.

A tip from an Iraqi led the U.S. troops to the house, Odierno said. American forces also have questioned one of Saddam's two wives, he said.

"We continue to tighten the noose," said Odierno, commander of the Army's 4th Infantry Division. He spoke to reporters at the Pentagon via a two-way video hookup from his Tikrit headquarters.

"I believe because of it they are moving around very quickly, they are very unsettled, and they are not living a very good life right now because we are constantly on their trail," Odierno said, speaking of Saddam and other former Iraqi officials.

Tikrit is Saddam's hometown, a source of continuing support for his deposed regime.

CBS News Correspondent Randall Pinkston spoke with Muhammad d'Ami, a professor at the University of Baghdad, who said many Iraqis may have useful information on Saddam's whereabouts. But after three decades of repression and cruelty, they may be afraid to talk, even with the U.S.'s $25 million bounty on Saddam.

There are signs that things are changing, that the fear may have receded somewhat.

When CBS' Pinkston approached an Iraqi woman at a local market, and asked if she'd be willing to volunteer information on Saddam if she had it, the woman said, "I would kill him with my own hands." The deposed dictator had killed her brother, she said.

Despite the deaths of Saddam's sons this week, attacks on Americans continued. The U.S. military said Friday that American troops were attacked in Iraq several times during the night, but no one was killed.

There were no details of the incidents. The military estimates insurgents have been attacking U.S. forces nearly a dozen times a day.

Meanwhile, a U.S. Army officer says several hundred Army uniforms have been stolen, including garments bearing nameplates, unit patches and flags. A search is under way. The officer says insurgents haven't been found wearing the clothes, but U.S. troops want to find the uniforms to prevent that from happening.