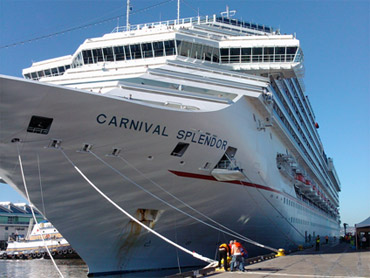 The Carnival Splendor's nightmare odyssey may be over, but the probe of what caused the electrical room fire aboard the luxury cruise liner is just getting started.

The flames knocked out almost al power on-board, leaving 4,500 stranded passengers and crew to endure three days without lights, hot food and hot showers before being led by tugboats to port in San Diego.

The National Transportation Safety Board originally said it would lead the investigation but now, reports CBS News Correspondent John Blackstone, that won't happen.

That, says Blackstone, is because the ship is registered in Panama.
Critics say cruise ship operators use the so called "flag of convenience" to skirt tougher regulations in the United States.

So, says Blackstone, officials from Panama will take the lead, with two experts from the NTSB assisting.

"They've tried in the past to investigate accidents involving Carnival ships," Hickey points out. "Carnival challenged that in the past, in federal court, and won."

What's in play here, CBS News Travel Editor Peter Greenberg told "Early Show on Saturday Morning" co-anchor Rebecca Jarvis, "is "where these ships are registered. And most cruise ships are not registered in the United States. In fact, almost none of them are. They're registered in Panama, Liberia, or in the Bahamas, and when something like this happens, it goes into the area of where the flag is flown. In this case, the Panamanian authorities will do the lead investigation. It doesn't mean the (NTSB) won't be involved. They just won't be the lead agency.

Greenberg says he thinks those laws should be changed. "When you have a ship that's home-ported in the United States," he asserts, "U.S. law should prevail. ... With all due respect to the Panamanian authorities, I have not seen a show called 'CSI: Panama' lately. I really want guys who know what they're doing, who really live this work, to do the investigation.

"There are reasons they call these countries flags of convenience - because of taxation, and wage issues. The cruise industry's not going to be racing to support this kind of a law. It's an economic issue as opposed to just a safety issue."

"Absolutely. In fact, there are over 230 ships cruising right. It's a $17 billion a-year industry. Nothing happened yesterday, nothing happened today, nothing's gonna happen tomorrow. You have to look very, very hard to find out where a life was compromised at sea that wasn't a health problem, that was actually a ship problem. When you have state-of-the-art systems like you have, even on this ship -- we don't know what really caused the fire yet. What we do know is the process that happened after the fire. On the bridge of the ship is something called an enunciator panel. It's on every major cruise ship. It allowed the officer on that bridge to identify and isolate the source of the fire immediately, close all water-tight doors, all air-tight doors, and push a panel that cuts off all the air conditioning in that area, because the worst thing that can happen on a ship is a fire that spreads through the ventilation system. So, nothing was compromised. Once they got that fire out, they were just floating and going nowhere for awhile.

"It was not a pleasant, experience but nothing was compromised. I'm not trying to be an apologist for the cruise line. I'm the last guy in the world who's gonna do that. But there was nothing at risk here once that ship stopped the power. They just needed to get towed home."

Greenberg says bargains will keep people coming for cruises, despite what happened with the carnival Splendor. "All the ships that are coming online now were ordered before the (economic) meltdown," he noted. "So, there's a great excess capacity in the cruise line business, which means there are great deals. I've seen cruise ship deals now for $299 seven-day cruises to the Caribbean, which happened before the 'Splendor' incident - that's about $45 a day, including three meals a day. You can't wake up in Topeka for that. People are going to go."