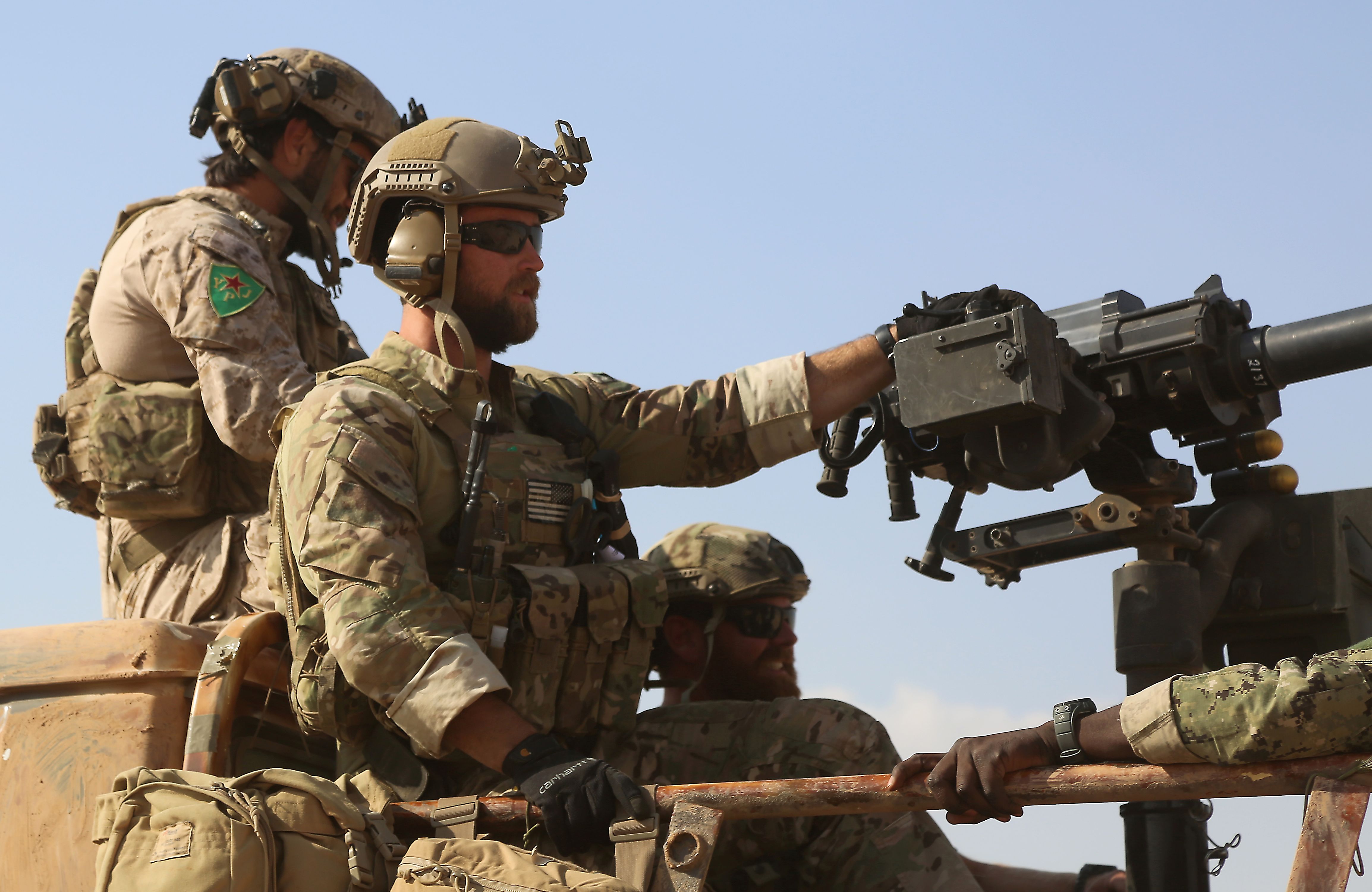 WASHINGTON -- American special operations troops were not authorized to wear the patches of Kurdish forces while advising them in Syria and have been told to remove them, the U.S. military spokesman in Baghdad said Friday, after Turkish leaders protested.

Army Col. Steve Warren said that while U.S. special operations forces have historically and routinely worn the insignia of foreign troops they are working with, this case was not appropriate due largely to political sensitivities.

Turkish Foreign Minister Mevlut Cavusoglu said it was "unacceptable" for soldiers of a Turkish ally to use the patches of the YPG, the Kurdish People's Protection Units fighting the Islamic State of Iraq and Syria (ISIS).

Turkey views the YPG as an extension of the Kurdish Workers' Party, or PKK, an armed insurgent group which it has fought for decades and is considered a terror organization by Turkey, the United States and the European Union.

Photos of U.S. special operations forces wearing the insignia surfaced this week, and Turkish leaders relayed their complaint to the U.S.

"There's political sensitivities around the organization that that patch represents, and that makes it inappropriate," Warren told Pentagon reporters Friday. "These guys on the ground do what they're going to do and they have their customs and courtesies that they have been following for years. But it's also important to understand the larger strategic context... and I think that's the inappropriateness of it, is that they didn't understand that."

Warren said Army regulations do not authorize troops to wear foreign patches, but the practice has gone on for years among commandos as part of an effort to connect with the troops they are training.

He said the troops were told the remove the patches and that he was not aware of any discipline related to the incident.

"We've made the correction, so everybody's moving on," said Warren.

Speaking during an international conference in southern Turkey, Cavusoglu said Turkey had relayed its displeasure to U.S. officials in Washington and in Turkey, and he rejected explanations that the patches were for the soldiers' protection.

"In that case, we would recommend they use the patches of Daesh, al-Nusra and al Qaeda when they go to other parts of Syria and of Boko Haram when they go to Africa," he said in reference to Jihadi extremist groups.

"To those who say they don't consider the YPG to be the same as these terrorist groups, this is our response: this is applying double standards, this is being two-faced," Cavusoglu added.

At the State Department, spokesman Mark Toner said Friday the U.S. has been very clear in its belief that the YPG is not connected to the PKK. And he downplayed the dispute with Ankara, saying he would not call it a crisis in U.S. relations with Turkey.

"On the contrary, we believe the YPG -- as well as other forces in northern Syria -- are effectively taking the fight to ISIL and we are going to continue to support them with our advise-and-assist operations there," Toner said.

Turkey is an ally in the U.S.-led coalition against ISIS but the two countries are at odds over the involvement of Kurdish fighters in northern Syria in the battle against the group.

On Thursday, Pentagon press secretary Peter Cook noted that U.S. special forces have in the past worn insignia of partner forces to "blend in with the community to enhance their own protection, their own security."

Cook also faced a barrage of questions about whether or not the special operations forces were on the front lines, since in the past U.S. officials have stressed that American troops are not at the battlefront.

"We do have special operations forces in Syria," Cook said, adding that they are an "advise-and-assist mission" with forces that carry out the fight against ISIS and they "are not at the front line."

He declined to provide any specifics about their location, but reports suggest they were in or near Fatisah, which was one of three villages that Syrian forces took back from ISIS militants in recent days.

Senior military officials said that it is difficult to tell where exactly the forces were, and how far from the fighting they were. They said the troops were moving with Syrian rebel forces as they headed toward Raqqa, and that it's possible they were closer to the front line of battle than they had been before. But they said there has been no change to the policy that the commandos will advise and assist but not fight on the front lines.

The officials were speaking on condition of anonymity because they weren't authorized to discuss the matter publicly.

Earlier this week, a U.S.-backed Syrian coalition of Kurdish and Arab fighters launched an offensive to begin forcing ISIS fighters from the de facto capital city of their self-proclaimed Islamic "caliphate" -- or at least to begin doing so.

The Syrian Democratic Forces, or SDF, as the umbrella group of fighters is called, announced the move on Twitter, and it was soon reported on Kurdish media and confirmed to CBS News by a representative for the group.

SDF statements posted on the group's official Twitter account said the operation was focused on liberating northern Raqqa, to protect the largely-Kurdish areas to the north from ISIS attack.

ISIS has controled Raqqa in northern Syria since sweeping across vast swathes of that country and neighboring Iraq in 2014. It is believed to operate most of its administration and control and command from the city.

There had been about 50 special operations forces in Syria doing the advising mission. But President Barack Obama has authorized the deployment of 250 more. Officials have said there are about 200 there now.