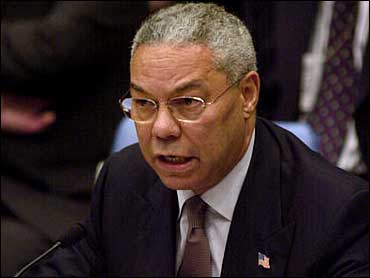 The Bush administration won't be "handcuffed" by the United Nations in responding to further defiance of weapons inspections by Iraqi President Saddam Hussein, Secretary of State Colin Powell says.

Looking for hidden chemical and biological weapons through renewed U.N. inspections could take months, Powell said Wednesday. In the meantime, he said, President Bush will reserve the right to use force against Iraq.

Refusing to cooperate with inspections is "an immediate red line," Powell said, as he showed little inclination to shade the strong stand the Bush administration has taken against Saddam.

"At no time will the United States foreclose its ability to act in its interest in accordance with its constitutional obligation to protect the nation and protect the people," he said at the State Department.

With agreement on a new inspections resolution still eluding diplomats in New York, the Bush administration is bracing for further delay with the expectation there will be no agreement before next week's congressional elections.

And even then, Powell said, the U.N. Security Council could wind up considering rival resolutions.

France's resistance to a provision in a U.S.-British draft resolution that could trigger an attack on Iraq if it foils U.N. weapons inspectors is the biggest hurdle to an agreement, a U.S. official said Wednesday.

Opposition from France and Russia has dragged the negotiations out for nearly seven weeks now, reports CBS News Chief White House Correspondent John Roberts. Russia simply wants economic assurances in a post-Saddam Iraq — that is, repayment of debt — and access to certain oilfields before it signs on. However, France wants something less tangible, says the White House's former Director of European Affairs: It wants status.

"It knows if the United States acts in Iraq outside the context of the security council, the Security Council becomes irrelevant," said Philip Gordon, now with the Brookings Institution. "And thus the French role in international politics becomes irrelevant."

The United States and Britain, with a scattering of support from other nations, want to threaten Iraq with "serious consequences" if it does not cooperate with inspectors.

Powell said the United States was agreeable to holding talks in the Security Council immediately after inspectors encounter resistance.

But at any point along the way, Mr. Bush retains the authority to use force against Iraq, Powell made plain in a joint news conference with German Foreign Minister Joschka Fischer.

"There is nothing that we would propose in this resolution or we would find acceptable in a resolution that would handcuff the president of the United States in doing what he feels he must do," Powell said.

In an apparently coordinated public campaign, Condoleezza Rice, President Bush's assistant for national security, also said "we'll not be handcuffed" by whatever decision the Security Council might take.

The United States is "determined to take action" if Saddam does not comply with U.N. resolutions, she said in a broadcast interview.

Raising hopes of an accord, Powell said he believed that "with a little more hard work on the part of all concerned we can find a way to accommodate the interests of our friends without in any way ... handcuffing the United States."

Fischer, whose government begins a two-year term on the Security Council in January, endorsed the need for "a strong message to the regime in Baghdad."

But, he said, "there is a disagreement about possible military action."

"I think everybody agrees there is a need for an effective regime," White House spokesman Ari Fleischer said.

Upon his return to New York, Blix said Mr. Bush had assured him and ElBaradei of full support and that he wanted to make sure "there is no cat-and-mouse game" with Iraq if inspections are resumed after a four-year lapse.

Powell, in an interview on National Public Radio's "Talk of the Nation," revised recent estimates that debate on the resolution was likely to be concluded by early next week.

His current assessment was "this will break one way or another" — with agreement on the U.S.-British draft or with the Security Council taking up rival resolutions as well — "towards the end of next week."

Powell said he would be surprised if the negotiations, now in their seventh week, were extended to the week after next.

U.S. congressional elections will be held Tuesday. If the Security Council has not reached a decision by then, President Bush is unlikely to announce a decision on the explosive issue of going to war with Iraq until after the returns are in.