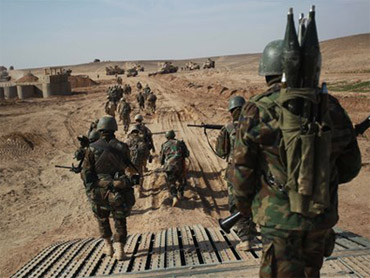 The U.S. military this summer is looking toward a lengthy offensive in the Taliban heartland of Kandahar, an operation that could ultimately define the outcome of the war.

The two-month campaign, expected to begin in June, also will test President Obama's bet that tens of thousands more troops can make the difference in an 8-year war that has shown only modest progress.

"This is really a strategic moment in the history of our involvement," national security adviser Jim Jones told reporters aboard Air Force One during Obama's covert overnight flight to Afghanistan last weekend.

Kandahar has long been considered crucial to winning the war. U.S. officials believe it was where al Qaeda leaders planned the Sept. 11 attacks, and it served as a governing capital to the Taliban before the 2001 invasion.

That the Taliban still enjoys considerable influence in the city and other areas in the south was a primary reason that Obama decided last fall to send 30,000 more troops. Under his plan, there will be nearly 100,000 U.S. forces in Afghanistan this year - nearly triple the level when he took office.

Military officials have already reported progress in other areas, as fresh troops have begun to trickle in. But officials hope wrestling Kandahar away from the Taliban would deal a fatal blow to the insurgency and help persuade the Afghan people to swing behind the central government in Kabul.

A senior military official said Monday that the offensive on Kandahar was expected to begin in June. The goal is to rid the city of Taliban forces before the Muslim holy month of Ramadan begins in August.

The official, who was not authorized to speak publicly on the operation, discussed it on condition of anonymity.

U.S. officials have previously disclosed plans for a NATO-led offensive in the area this year, but have not said when it might happen.

Until the start of major military operations, U.S. troops are working on securing transit routes and persuading the leaders of districts surrounding Kandahar to cooperate with NATO forces.

Even after major operations begin, officials say it won't look like World War II's D-Day. Gen. Stanley McChrystal, the top U.S. and NATO commander in Afghanistan, said much of the focus will be on working with political leaders and teaming U.S. forces with Afghan police.

Still, U.S. officials are warning of increased casualties as a result of operations in Kandahar and elsewhere.

"We all expect the fight to get tougher as we carry out the new campaign plan," said Defense Secretary Robert Gates.

CBS News correspondent Mandy Clark reports that more than 1,000 U.S. troops have been killed in the eight year war, and those casualty figures have risen sharply in recent months. In the first three months of 2010, the number of troops killed has nearly doubled compared to the same period last year.

Obama made his first trip to Afghanistan on Sunday, meeting with troops and Afghan leaders.

During his six-hour visit, Obama told Karzai and other Afghan officials that they must step up and make progress on reducing corruption and ensuring the delivery of basic services to the Afghans. In a visit to troops at Bagram Air Field, Obama said the fate of the nation is ultimately up to the Afghans.

"Our intent is to make sure that the Afghans have the capacity to provide for their own security. That is core to our mission," Obama said.

At least 945 members of the U.S. military have died in Afghanistan, Pakistan and Uzbekistan since the war's start, according to an Associated Press count. With the fight engaged more intensely now, the number killed in the first three months of this year was roughly double the total from the same period last year.