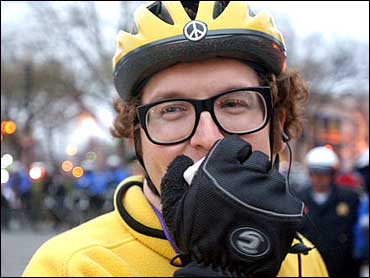 Even as civil libertarians challenge police surveillance of citizens, including anti-war organizers, judges and lawmakers across the nation are easing long-standing restraints on police in the name of homeland security.

The changes will help guard against terrorists, proponents said.

"The Constitution's protections are unchanging, but the nature of public peril can change with dramatic speed, as recent events show," U.S. District Judge Charles S. Haight wrote in a ruling loosening restrictions on police surveillance of political groups in New York City that took effect March 25.

Police said they need the authority to keep order in a time of large-scale demonstrations - and to protect officers themselves.

"It's not really a Big Brother state," said police Capt. Bill Fisher, commander of the civil affairs unit in Philadelphia, who has made contacts with anti-war groups. Officers videotape demonstrations, he said, partly to have "proof that we weren't breaking the law" in the event of brutality allegations.

But critics warned that allowing undercover agents to infiltrate anti-war organizations, tap phones of political groups and keep files on individual activists could have a chilling effect on free speech and free assembly.

"This is a very bad trend," said Samuel Walker, professor of criminal justice at the University of Nebraska at Omaha. "Spying on people who are not engaged in any criminal activity is bad and it's illegal. In times of war we as a nation have often done things that have been very wrong. It's important to be vigilant."

In Denver, news that organizations like Amnesty International and the American Friends Service Committee (Quakers), both winners of the Nobel Peace Prize, were among the subjects in police intelligence files touched off sharp criticism last year.

"We thought this type of activity was ancient history," said Lino Lipinsky, whose law firm worked with the American Civil Liberties Union to sue the city.

Negotiations are under way between lawyers for the city and the ACLU to settle that lawsuit.

But ACLU Colorado legal director Mark Silverstein said the types of files gathered in Denver are common in many communities where they are not specifically banned.

In Los Angeles, for example, where the police commission recently revised its anti-terrorism unit's standards to allow broader surveillance, Capt. Gary Williams said files are kept on anti-war organizations about whom police have a "reasonable suspicion to believe that there may be a potential for a significant disruption of the public order."

In Washington, D.C., anti-war activist Adam Eidinger is suing the Metropolitan Police Department, claiming officers posed as activists and attended meetings at his home. "It's Soviet..., it's outrageous," he said.

The District of Columbia department did not respond to telephoned and faxed questions about political surveillance by undercover officers.

In many cities, political surveillance was specifically banned, often by federal courts, in the 1980s in response to revelations that law enforcement agents during the civil rights movement and Vietnam War protests were tapping phones and spying on groups including Quakers, the ACLU and the League of Women Voters.

These days, however, "the whole mood of the country is different; there's greater fear and it's going to be reflected in greater surveillance," said Chief Judge Richard Posner of the 7th U.S. Court of Appeals, which in 2001 overturned Chicago's consent decree that had restricted political spying by police.

In some communities like Chicago and New York, judges - at the behest of police officials or city attorneys - are overturning the decades-old restraining orders. In other communities legislators are rewriting the old restrictions.

Gail Donoghue, special assistant to New York City's corporation counsel, said many police departments around the country established guidelines based on New York's ruling. After it was lifted, she said, her telephone began ringing with city officials wondering how they can enact similar changes.

"I've heard from a lot of those cities and there's definitely interest in what we're doing," she said.

Mayor Greg Nickels said he wouldn't rule anything out.

"I want us to get all the information we need to keep our people safe," the mayor said. "If our intelligence ordinance in fact is a barrier to that, then I will propose changes to it."

But Hugh Spitzer, a Seattle attorney who had helped write the ordinance, said: "It's precisely at times like this that we need to have the strongest protections of individual rights and civil liberties."

Seattle police said no formal proposal has yet been made.

In Oregon, legislators are considering repealing a 22-year-old law that prohibits police from collecting and maintaining information about the political, religious, social views or activities of any person or group unless that information directly relates to a criminal investigation.

The law was passed in part to shut down the Portland Police "Red Squad," which began surveilling political, religious and other organizations in the 1940s. Last year, a series in the Portland Tribune uncovered police files tracking groups ranging from the Ecumenical Ministries of Oregon and Planned Parenthood to the Sierra Club and the United Farm Workers.

Cities and states seeking to lift restraints on police surveillance are getting encouragement from the federal government.

Under the proposed Domestic Security Enhancement Act of 2003, the Justice Department would support communities in terminating state law enforcement consent decrees from before Sept. 11, 2001, that limit police from gathering information about individuals and organizations. (Exceptions are made for consent decrees relating to racial profiling and other civil rights violations.)

Justice Department spokesman Mark Corallo said the document was an early draft and that any proposed legislation would have to be approved by Congress.