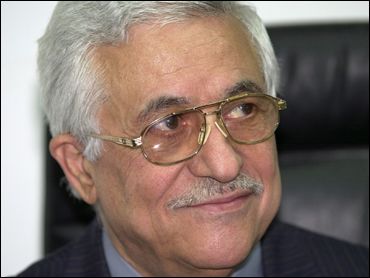 The Bush administration has cleared the way for $20 million in direct U.S. assistance to the Palestinian Authority, a step reflecting its support for Prime Minister Mahmoud Abbas' leadership.

The United States also plans to ask Israel to release more Palestinian prisoners to ease a crisis within the Palestinian leadership that prompted Abbas to threaten to quit, Israel's Army Radio said Wednesday.

The waiver from Congressional restrictions on the aid that was signed Tuesday by Deputy Secretary of State Richard Armitage allows the administration to sidestep Yasser Arafat by distributing U.S. aid directly to the Palestinian people.

The administration and Congress had accused the Palestinian leader of corruption.

The direct distribution will help Abbas to respond to the humanitarian needs of the Palestinians, a senior U.S. official said. A formal announcement was expected later Wednesday.

The $20 million is a fraction of more than $200 million in U.S. assistance to the Palestinians this year. But Armitage's move, which the senior U.S. official said had the support of Israel and members of Congress, could lead to further steps in that direction.

Raanan Gissin, an adviser to Israeli Prime Minister Ariel Sharon, said Wolf was "exploring ways of how to advance the peace process, how to speed it up, how to move it along."

On Tuesday, Abbas threatened to resign unless his party backed his tactics in talks with Israelis, Palestinian officials said. The three largest Palestinian militant groups declared a unilateral cease-fire on June 29, but say it will collapse unless Israel releases the bulk of thousands of Palestinian prisoners it holds.

For years, the United States has bypassed Arafat and the Palestinian Authority and has assisted Palestinians directly through the United Nations and private groups.

This year, the Palestinians are due to receive $124.5 million from the U.S. Agency for International Development, while the State Department's refugees bureau provides Palestinians with $89 million through the United Nations Relief and Works Agency.

The European Union and the Arab League have given more than $1 billion directly to Arafat and the Authority this year.

The military said troops were shot at and returned fire, killing the brother of the wanted man, who was armed. It said Iyad Halanesh's brother was implicated in several attacks, including the June 30 killing of a Bulgarian truck driver near Jenin. Palestinian sources said Halanesh's wife was wounded during the operation.

Palestinian militant groups warned that if Israel continues such raids, they will nullify the cease-fire. Israel said it will protect its citizens, and terrorists will not be immune.

On Tuesday, as internal tensions rose in the Palestinian leadership, Abbas called off a meeting with Israeli Prime Minister Ariel Sharon set for Wednesday. Some officials blamed Israel's refusal to release more prisoners and others citing lack of support for Abbas from fellow political leaders.

Also Tuesday, in a largely symbolic gesture, Abbas resigned from the Central Committee of Yasser Arafat's Fatah movement, said Hakam Balaawi, a Fatah official. In his decades as Arafat's deputy in Fatah and the PLO, Abbas has resigned or threatened to resign many times. Fatah insiders said this time, too, it was a ploy to force Fatah to back him.

Fatah has been in turmoil over its declaration of a cease-fire 10 days ago. The moves also applies to its affiliated militia, the Al Aqsa Martyrs' Brigades.

Fatah officials were trying to persuade Abbas to withdraw his resignation. Militant groups, with backing from some Fatah activists, criticized Abbas for not pressing Israel harder for release of Palestinian prisoners.

In a letter to Arafat, Abbas said he would step down as premier unless he received clear instructions from Fatah over how to handle contacts with Israel.

Fatah officials said Abbas' move might be a pressure tactic aimed at forcing Fatah members to give him greater flexibility in the talks.

The United States rallied to his support. "We stand behind Prime Minister Abbas," State Department spokesman Philip T. Reeker said. The U.S. administration pushed for his appointment in April as an alternative to Arafat.

Israel refuses to free detainees involved directly in terror attacks, including members of the violent Islamic groups, Hamas and Islamic Jihad. Abbas is said to be concerned that if Israel sticks by its refusal, the two groups might cancel their three-month truce. Fatah called a six-month cease-fire.

Interviewed on Israel TV on Tuesday, the chief of Israeli military intelligence, Maj. Gen. Aharon Zeevi-Farkash, did not rule out the release of some members of the Islamic groups, saying the matter was too sensitive to be discussed on television.

However, he insisted that Israel must not release prisoners tied to terrorism. "It is forbidden to free terrorists with blood on their hands," he said.