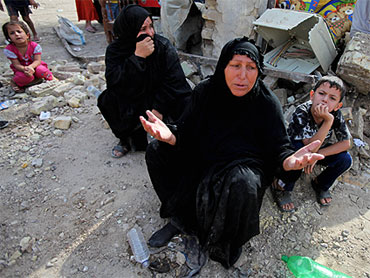 Insurgents in Iraq are testing the country's security forces and asserting their might in a wave of violence that comes as the U.S. has begun pulling out combat troops.

Coordinated attacks Wednesday killed at least 56 people and injured hundreds, the worst day of violence in more than two years. And the violence is continuing Thursday, two days after the U.S. troop level fell below 50,000 for the first time since the war began in 2003.

Insurgents killed six members of a government-allied Sunni militia in an ambush northeast of Baghdad on Thursday, police said, offering no respite to a nation reeling from Wednesday's violence.

Diyala police spokesman Maj. Ghalib al-Karkhi said the government-allied fighters, known as Sahwa or Awakening Councils, were driving near the town of Muqdadiyah around 1:30 a.m. when their car hit a roadside bomb.

The explosion killed four of the guards immediately, al-Karkhi said. Gunmen then attacked the two survivors, killing them, he said.

Muqdadiyah is about 60 miles north of Baghdad.

The Sahwa are a government-backed Sunni militia that joined forces with U.S. troops against al Qaeda in 2006 and helped turn the tide of the war. Since then, the Sahwa fighters have become frequent targets of insurgent attacks.

The early morning ambush comes on the heels of a string of attacks a day earlier that struck at least 13 Iraqi cities. Fifty-six people were killed - including at least 31 policemen and soldiers - in a series of bombings and shootings across the country.

The attacks made August the deadliest month for Iraqi security forces in two years. But insurgents have been stepping up their attacks for months.

"It's about the terrorists trying to make a point about the lack of a government, trying to challenge the security forces, put doubts into people's minds about whether they are ready or not," said Gen. Ray Odierno, the commander of U.S. forces in Iraq.

In fact, in many cases the Iraqis are not ready, as some admit.

"We won't know probably for three to five years," Odierno said. "If nothing else, we got rid of a tyrannical dictator who terrorized the Iraqi people."

At least 265 security personnel - Iraqi military, police and police recruits, and bodyguards - have been killed from June through August, compared to 180 killed in the previous five months, according to an Associated Press count.

"The Iraqi army and police … are fighting hard for their country," Michael O'Hanlon, a Brookings Institution scholar and early booster of the Iraq War told CBS' "The Early Show". "They're doing pretty well. They can't stop every act like this."

On Wednesday, as in earlier attacks, insurgents took aim at security forces where they are supposed to be the safest, turning police stations into rubble and bringing down concrete walls erected to protect them.

Iraq's foreign minister said insurgents are attempting to sow as much chaos as possible, as lawmakers struggle to form a new government and Americans withdraw troops.

"Here you have a government paralysis, you have a political vacuum ... you have the U.S. troop withdrawal," Iraqi Foreign Minister Hoshyar Zebari said. "And, in such environment, these terrorist networks flourish."

In August, nearly 5 Iraqi security personnel on average have been killed every day so far.

These numbers are considered a minimum, based on AP reporting. The actual number is likely higher, as many killings go unreported or uncounted.

"This summer's been a bit of a blip upwards and that's tragic. The overall trend lines, as we've pulled down if previous periods, are been favorable," O'Hanlon said. "I'm relatively optimistic if they can get the next government together. That's a big if."

That rise in deaths coincided with the drawdown of U.S. troops. American officials said on Tuesday that the number of troops fell below 50,000 - a step toward a full withdrawal by the end of 2011.

A senior Iraqi intelligence official, who spoke on condition of anonymity because he wasn't authorized to talk to the media, raised the possibility that some of the attackers had inside help.

President Barack Obama will address the situation in Iraq in a primetime speech to the nation Tuesday. He won't make the mistake of declaring "mission accomplished," Plante reports.

There are still 50,000 American troops there for at least another year. Their mission will now be one of support, but they can still fight if they have to.