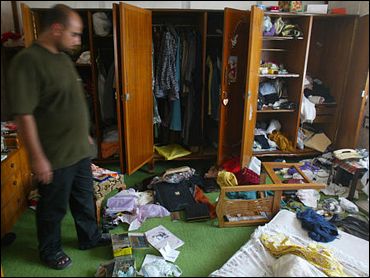 U.S. troops raiding Iraqi homes in search of weapons and suspects are trampling on a particularly important Muslim sensibility — the sanctity of the home.

Many Iraqis see the pre-dawn raids as the single most offending practice of the U.S. occupation. They're part of hundreds of cultural clashes that occur daily between Iraqis and Americans.

U.S. troops have been raiding homes in search of members of Saddam Hussein's toppled regime and illegal weapons since the fall of Baghdad. But the raids have become much more frequent in recent weeks, focusing on areas north and west of the Iraqi capital where the former dictator enjoyed his strongest support.

Iraqis complain the raids expose women to soldiers when they are not properly dressed — raising questions of honor in much of Iraq — and terrify children. They say the soldiers force doors open rather than use keys on offer, go through personal belongings and humiliate the men in front of their families by cuffing their hands and ordering them to lie face down on the ground.

U.S. officials counter that soldiers don't intend to mistreat Iraqis. The raids, they say, are carried out professionally and for genuine security reasons.

"They're humiliating," Mahmoud al-Samarrai, 50, said of the raids. "Some of our fellow Muslims and Arabs say the Americans liberated us. If they think this is liberation, then we wish them the same," said the retired civil servant from Samarra, a stronghold of Saddam supporters north of Baghdad and a frequent target of U.S. raids.

Iraqis, like Muslims everywhere, observe a rigid etiquette when entering someone else's home. The process is designed to safeguard the privacy and allow time for women to move out of sight or to change into more appropriate dress — covering the body with loose garments and using a scarf to conceal the hair in line with Islamic practice.

Traditionally, men visiting another's home pause outside to announce their presence through a loud clearing of the throat, shouting a greeting or calling out the name of the man of the house. They wait outside until the head of the family tells them to proceed.

Many rural homes in Iraq have a special room with a separate entrance that's used exclusively by the head of the family to receive male guests, an arrangement that keeps women out of the visitors' sight.

Under Islamic law, taking out the eye of someone who spies on someone else's home need not be punished.

"Our homes have sanctity, but these American aggressors have no way of knowing that," said Hatem Ahmed, a mosque imam and a lecturer at Baghdad University. "They have become a heavy burden on us and it's time they left," he said.

An Associated Press reporter who accompanied U.S. troops during a recent raid on a Baghdad house said the soldiers stormed in, shouting and swearing. They rushed into a living room. Women shrieked while clutching crying babies.

"Sit down!" the soldiers screamed at the women. Then they kicked open the home's doors, found a man and dragged him outside. The man was handcuffed and sat against a wall until herded onto a truck and taken for questioning.

In Fallujah, a city west of Baghdad where U.S. troops have come under frequent attacks, men as old as 60 recounted raids on their homes when they were handcuffed and told to stand facing a wall.

U.S. military commanders say they must balance security with efforts to win the trust of Iraqis.

"I will not deny that there are times when we have been forceful and knocking down doors," said Maj. Anthony Aguto of the 3rd Armored Cavalry Regiment in al-Anbar province, scene of the worst violence against U.S. forces. "We do that when we feel that we are in danger or threatened or when we have reliable intelligence on weapons."

Aguto said there were instances when the use of force was unnecessary, with soldiers quickly calming members of the household and offering sweets to the children.

"My men are culturally sensitive," he declared, adding that many of them find house raids to be "distasteful but necessary."

Capt. Michael Calvert, the regiment's spokesman, said that in cases when intelligence that led to a house raid was found to be false, U.S. troops returned to the raided dwelling and carried out repairs.