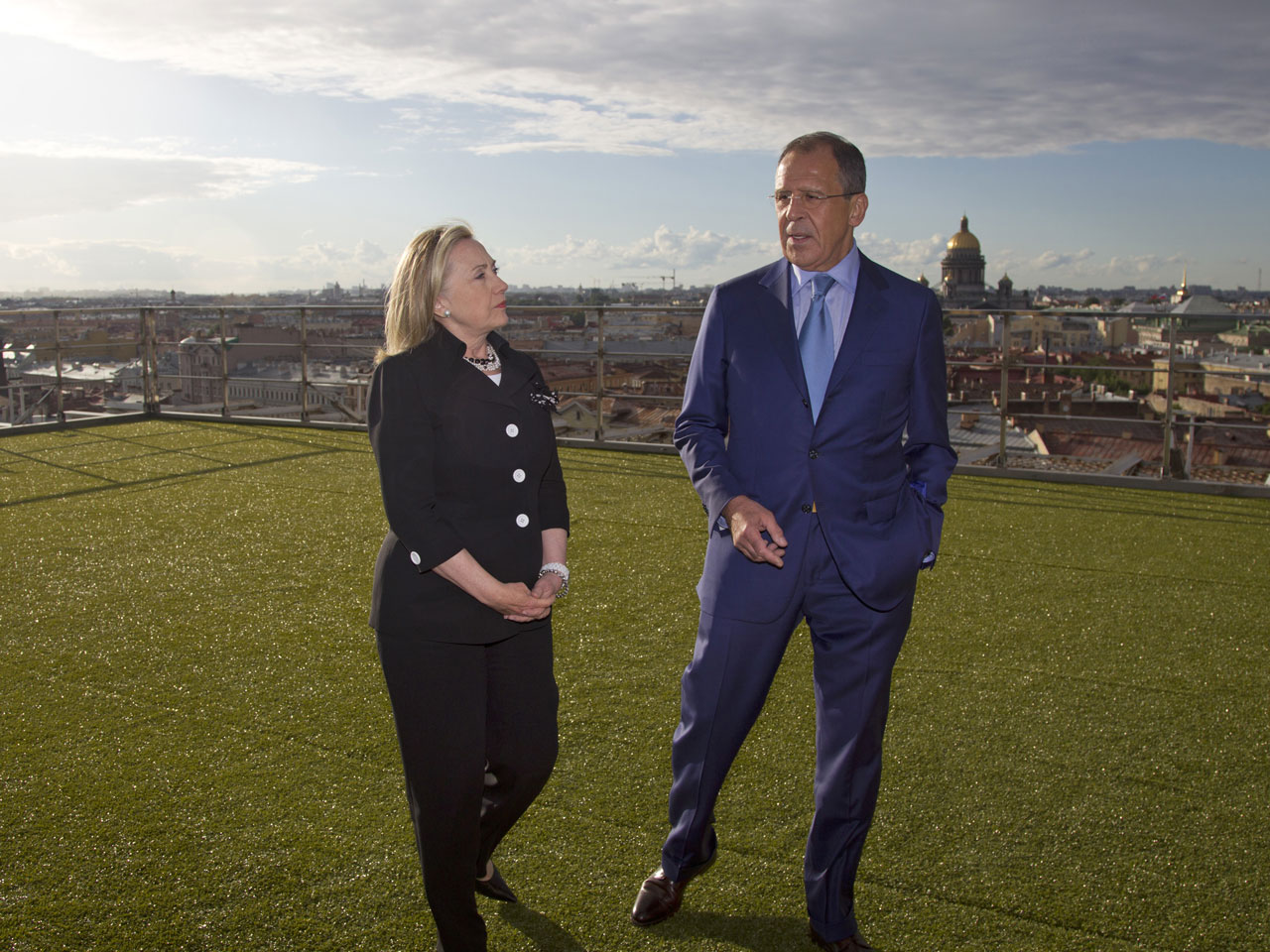 (AP) ST. PETERSBURG, Russia - The top U.S. and Russian diplomats failed Friday to bridge their differences over Syria on the eve of a landmark multinational conference that had been designed to sign off on a plan to ease Syrian President Bashar Assad out of power.

"We may get there tomorrow, we may not," a senior State Department official told reporters as U.S. Secretary of State Hillary Rodham Clinton left Russia for Geneva, where the conference will be held Saturday.

Assad vows Syria will "annihilate terrorists", but Annan "optimistic" ahead of talks
Russia: No backing for any plan that calls for Syria's Assad to step down
World leaders to talk Syria without Iran, Saudis

Clinton and Russian Foreign Minister Sergey Lavrov met for one hour in St. Petersburg, then shared dinner before Clinton left Russia. The official said the two talked through all the areas of differences and difficulties.

Areas of difficulty and difference remain, said the official, speaking on condition of anonymity to discuss sensitive negotiations.

The St. Petersburg meeting occurred ahead of Saturday's conference aimed at ending 16 months of brutal violence in Syria. There was hope they could iron out deep differences over the transition plan being pushed by U.N. envoy Kofi Annan. It calls for the formation of a national unity government that would oversee the drafting of a new constitution and elections.

U.S. officials are adamant that the plan will not allow Assad to remain in power at the top of the transitional government, but Russia insists that outsiders cannot dictate the ultimate solution or the composition of the interim administration.

Annan laid out his expectations for the weekend conference in an op-ed Friday in The Washington Post. The future government in Syria, he said, "must include a government of national unity that would exercise full executive powers.

"This government could include members of the present government and the opposition and other groups, but those whose continued presence and participation would undermine the credibility of the transition and jeopardize stability and reconciliation would be excluded," Annan said.

Such a proposal does not explicitly bar Assad, but the U.S. and other Western powers that will participate in the conference said that is implicit.

Assad also said any future government in Syria must hold free and fair elections for a multiparty government. The official said Clinton and Lavrov agreed to attend the Geneva conference anyway, out of respect for Annan.

Lavrov issued a more hopeful statement after the meeting.

"I have felt a change in my colleague Hillary Clinton's position in a way that I heard no ultimatums, nothing was said about that paper (the Annan plan) being absolutely unchangeable," Lavrov was quoted by the Interfax news agency as saying.

"(We) agreed to look for an agreement that will bring us closer based on a clear understanding of what's written in the Annan plan that (all) sides in Syria need an incentive for a national dialogue," Lavrov was quoted as saying. "But it's only up to the Syrians to make agreements on what the Syrian state will be like, who will hold (government) jobs and positions."

Lavrov predicted the meeting had a "good chance" of finding a way forward. "But I am not saying that we will agree on every dot," he said.

The senior State Department official said Clinton and Lavrov also discussed the real danger for the region if the uprising in Syria that has killed some 14,000 people doesn't end peacefully. Already, Syria has shot down a Turkish warplane and Turkey has responded by setting up anti-aircraft guns on its border with Syria. They also discussed the "serious risk" of destabilizing Jordan and the potential impact on Israel.

On Friday, Syrian troops shelled a suburb of Damascus, killing an estimated 125 civilians and 60 soldiers..

Russia is Syria's most important ally, protector and supplier of arms. Diplomatic hopes for have rested on persuading Russia to agree to a plan that would end the Assad family dynasty, which has ruled Syria for more than four decades.

The difference in interpretation between the U.S. and Russia could prove to be the plan's unraveling.

On Thursday, Lavrov acknowledged that a transition period is necessary to end the violence in Syria, but said Russia had not agreed to all elements of Annan's plan, in particular any suggestion that Assad would be required to leave.

"We are not supporting and will not support any external meddling," Lavrov said. "External players must not dictate ... to Syrians, but, first of all, must commit to influencing all the sides in Syria to stop the violence."

He also said the Annan plan was still a work in progress.

But, Clinton, speaking Thursday in Riga, Latvia, said it was "very clear" that all participants in the Geneva meeting, including Russia, were on board with the transition plan. She told reporters that the invitations made clear that representatives "were coming on the basis of (Annan's) transition plan."

She said then that she expects the meeting "to provide an opportunity to make real progress" on that plan.