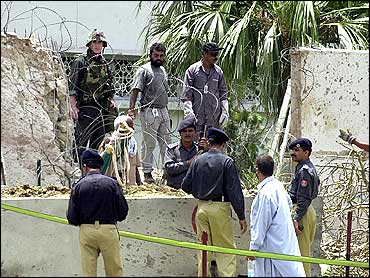 The United States has closed its consulate in the Pakistani city of Karachi because of security threats, U.S. officials said Monday.

Also Monday, Five unidentified men stormed the gates of a Christian school in a popular mountain resort, killing at least six people and wounding two others before escaping.

The attack occurred at the Murree Christian School in Murree Hills, 35 miles north of Islamabad in the Himalayan foothills. The school was founded in 1956 to train children of missionaries here and in neighboring countries.

A statement by the school said there had been "several deaths and injuries" but all students and expatriate staff were safe. One female missionary suffered an injury to her hand, the school said.

Meanwhile, consulate staff were sent home Monday morning and told to wait for instructions, said a consulate official in Karachi, who spoke on condition of anonymity.

"The consulate-general has been closed for security reasons," said Linda Cheatham, a spokeswoman for the U.S. Embassy in Islamabad, reading from a prepared statement. She would not say if the closure was permanent or give further details.

Mukhtar Ahmed, provincial home secretary, said the U.S. embassy had not given a reason for the closure to Pakistani authorities.

"We don't know the reasons. ... There is no specific threat or security issue. There is no such thing. There must be some technical reasons," Ahmed told reporters in the southern port city of Karachi.

Karachi, a sprawling city of 14 million people, has seen extremist violence and anti-Western sentiment following last year's start of U.S. military operations in neighboring Afghanistan. The government of Pakistani President Pervez Musharraf has been a key supporter of the U.S. campaign.

On June 14, 12 people — all Pakistani — were killed and 50 injured in a car-bombing outside the U.S. consulate.

Following the blast, the main road in front of the consulate was sealed for weeks. Traffic later resumed but only on the side of the road away from the consulate, and with strict police checks of all vehicles.

Even before the June attack, security was tight. The sidewalk in front of the U.S. consulate has been closed off by large concrete blocks, as have smaller streets near the structure. More blocks and barriers have added since the blast.

One or two Pakistani armored troop carriers have also been parked in front, and police and paramilitary rangers stand guard.

Last month, France closed its consulate building in Karachi and moved its diplomats and staff to the more heavily guarded British consulate.

Islamic militants have threatened to strike against American interests in Pakistan in retaliation for Pakistan's support for the U.S.-led war against terror and its ongoing crackdown on Muslim extremists. Similar threats were also made after a Pakistani court handed down the death sentence to one of those convicted in the murder of U.S. reporter Daniel Pearl.

The school shooting may be an example of such an attack.

Police official Mohammed Maqbool said officers exchanged fire with the attackers for about 20 minutes before the gunmen fled. Witnesses said they later saw bodies being taken from the scene.

Federal officials in Islamabad said they did not know the identities or the motive of the attackers. The dead were identified as two security guards, two school employees, one unknown person and a retired teacher who was at the school to collect his pension.

It was the third fatal attack against Christian institutions in this predominantly Muslim country since President Pervez Musharraf joined the U.S.-led war against terrorism last year.

The threats come despite stepped up pressure by Pakistani security forces on Taliban and al Qaeda members who fled the U.S. military campaign in Afghanistan.

Last month, police in Karachi arrested three men accused in an attempt to kill Pakistani President Musharraf in April. The plot failed when a vehicle rigged with explosives did not detonate as Musharraf's convoy drove past, police said. The same vehicle subsequently was used in the U.S. Consulate bombing, according to police.