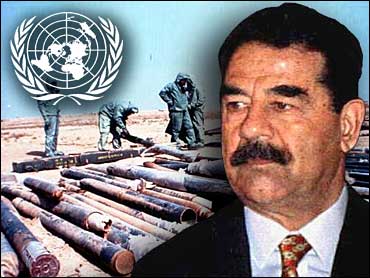 The United States submitted a final revision of its Iraq resolution to the United Nations Security Council on Wednesday in hopes of winning approval after eight weeks of tumultuous negotiations with wary allies concerned it could trigger a new war against Iraqi leader Saddam Hussein.

The draft has changed significantly since it was first introduced last month, but U.S. officials said the bottom line remains the same: tough new weapons inspections coupled with a threat of "serious consequences" if Iraq fails to comply.

While the revised draft offers major concessions to critics, it still frees the U.S. to take military action against Iraq without a second resolution.

In an attempt to meet French and Russian concerns, the new U.S. draft gives Saddam "a final opportunity" to comply with U.N. inspectors, holds out the possibility of lifting sanctions against Iraq, and adds a reaffirmation of Iraq's sovereignty.

But it remains to be seen whether the latest draft, written with British support, will satisfy Russia, France and other members of the council.

Russia's Deputy Foreign Minister Yuri Fedotov said Wednesday that Moscow remains opposed to any wording that would give Washington a free hand in launching military action.

"We still believe that it's necessary to ensure that the new resolution contains no automatic mechanism for the use of force," Fedotov said, according to the ITAR-Tass news agency.

U.S. diplomats met earlier Wednesday with the four other veto-wielding permanent council members - Russia, France, Britain and China - before sharing the new text with the other 10 elected members.

"We certainly believe that this is a resolution that deserves consensus support," Negroponte said.

A U.S. official, speaking on condition of anonymity, said Powell worked out some of the final points on key issues with French Foreign Minister Dominique de Villepin.

But a French diplomat said Paris has not signed off on the new U.S. draft.

"It's too early to say we have an official position on a text," the diplomat said late Tuesday. "We have to see the text. We must send it to Paris and our government, including the president, will have a careful look at the entire text, not only one or two paragraphs."

Another council diplomat called it "a partial deal" that still needs work.

Minutes after the resolution was officially introduced in the council Wednesday, Richard Grenell, Negroponte's spokesman, said the new draft "calls for inspections anytime, any place, with no more exceptions."

The draft, officially submitted Wednesday, significantly waters down previous references to Iraq being in "material breach" of its obligations to disarm under U.N. resolutions - words that Moscow and Paris argued could be used by Washington to trigger a war without Security Council authorization.

The U.S. proposal now includes a "carrot" to spur Baghdad's compliance by giving it "a final opportunity to comply with its disarmament obligations."

A second reference reiterates that any "false statements or omissions" in Iraq's declaration of its weapons programs or failure to comply with inspectors "shall constitute a further material breach." Under the new draft, such a failure would be assessed by Security Council.

However, the resolution does not meet Russian, French and Chinese demands that the possibility of force be considered only in a second resolution if Iraq fails to comply.

It calls on inspectors "to report immediately to the council any interference by Iraq with inspection activities, as well as any failure by Iraq to comply with its disarmament obligations."

The Security Council would then convene immediately "to consider the situation and the need for full compliance" by Iraq. But there's no mention of adopting a second resolution, leaving Washington free to act.

The U.S. draft retains most of the previous proposals to strengthen U.N. weapons inspections.

It requires Iraq to provide inspectors with "immediate, unimpeded, unconditional, and unrestricted access to any and all" buildings and sites, including presidential sites, where advance notice was previously needed for inspections.

Inspectors can also decide whether to interview Iraqi scientists and government officials outside the country. Chief weapons inspector Hans Blix has said this would be difficult to carry out.

For a resolution to be approved by the 15-member council, it needs at least nine "yes" votes and no veto by a permanent member. So far there has been no threat of a veto although some countries, including Mexico, have said they could abstain if there is no consensus among the major powers.

The search for an Iraq resolution began Sept. 12 when President Bush challenged world leaders at the U.N. General Assembly to deal with Iraq's failure over the last 11 years to comply with resolutions or stand aside as the United States acted.

The Security Council imposed sanctions on Iraq after its 1990 invasion of Kuwait. Under council resolutions, sanctions cannot be lifted until U.N. inspectors certify that Iraq's nuclear, chemical and biological weapons programs have been dismantled along with the long-range missiles to deliver them.