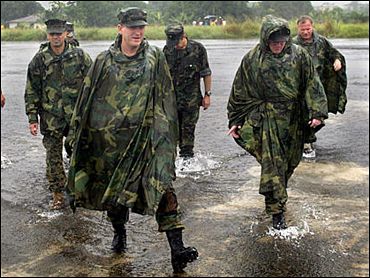 U.S. military advisers visited a camp that once housed tens of thousands of people forced from their homes by more than a decade of civil strife Thursday, finding it largely deserted after it was overrun by fighting between fighters loyal to President Charles Taylor and rebels surrounding his capital.

The U.S. team, in Liberia to assess security conditions and humanitarian needs of its 3 million people, drove past empty villages to reach the camp housed in a crumbling Voice of America radio relay station of bombed-out buildings, rusting radio towers, refugees and orphans.

Just a few hundred of the estimated 50,000 people who once lived there remained Thursday. Huddled beneath leaky roofs, they pleaded for help from President Bush.

"We want peacekeepers from George Bush," said Masslie Bearbear, 71, who has lived at the camp with three generations of his family since 1992. "This is an American country. George Bush is our president. If we don't have security, we will die."

Bearbear and others described nightly looting and raping raids by Taylor's heavily armed fighters — including "small boys," one man said, placing a hand near his waist to indicate a child soldier's height.

"If you're lucky, they let you live. If you're not, they kill you," Bearbear said.

"The U.S. has not indicated what it will do but I expect it to take the right decision and grant support," Annan said during a meeting with Mozambican President Joaquim Chissano.

Washington is wary of becoming too deeply involved in a West African conflict — especially with American troops already heavily committed in Iraq, Afghanistan and Kosovo.

Mr. Bush, speaking Wednesday in South Africa on the second stop of a five-nation African tour, promised to work with the United Nations and African countries to enforce an oft-violated June 17 cease-fire, and "see to see to it that Mr. Taylor leaves office so there can be a peaceful transition in Liberia." But he said he will not overextend U.S. armed forces.

A U.S. official in Liberia's capital said he believed security was the country's most pressing problem. He said it remained unclear how much of a threat Liberia's warring factions could pose to U.S. forces, should Mr. Bush decide to deploy them. Yet the official added: "untrained, undisciplined troops are always a threat."

Meanwhile, the United States has secured permission from Guyana for U.S. planes to make refueling stops in the South American country in the event it does send troops to Liberia, officials from both countries said Wednesday. Permission was granted for planes to land "in a matter of days," said Robert Persaud, a spokesman for Guyana's president, Bharrat Jagdeo.

An 11-person U.S. military assessment team met with ECOWAS officials Thursday in Accra, Ghana to discuss "Liberia questions," said Susan Parker-Burns, spokeswoman for the U.S. Embassy there. She did not elaborate.

Taylor — a one-time warlord wanted for war crimes in neighboring Sierra Leone — is viewed by international prosecutors, diplomats and some Liberians as the main impediment to peace in the region.

Under the cease-fire, Taylor promised to step down, clearing the way for a transitional government that will oversee fresh elections. He has not yet done so.

West African nations initially offered 3,000 troops and suggested the United States contribute 2,000. But negotiators meeting in nearby Ghana said Wednesday it would take too long and cost too much to mobilize a force of this size.

The West African regional bloc known as ECOWAS is now proposing to mobilize an initial 1,000 soldiers in the next two weeks and is asking the United States for 1,500, west African diplomats involved in the talks said on condition of anonymity.

Taylor has also urged the United States to send troops. On Sunday, he accepted an offer of asylum from Nigerian President Olusegun Obasanjo, but on condition that an international stabilization force is deployed to ensure an orderly transition.

Many fear Taylor's departure could spark the kind of factional violence that overran Monrovia during the last civil war.

Asked about Taylor in an interview with the BBC, Secretary of State Colin Powell said the U.S. is "expecting him to step down, as he said he would."
"The timing is something to be determined. What we don't want to see is a sudden vacuum, which causes even more instability in that very troubled country," Powell said.

The secretary then indicated that Taylor would have to be gone by the time any U.S. troops went in, if they were deployed, saying "we believe it is important for him not to be there when a transitional government is formed and when peacekeepers are present to make sure that the situation doesn't descend into more chaos at that moment."