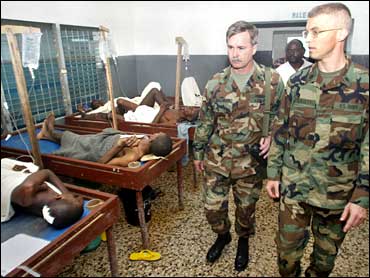 U.S. military assessors visited wards filled with patients nursing bandaged wounds Wednesday, coming face to face with the result of more than a decade of civil strife as they toured a damaged hospital that still provides the only surgical care for Liberia's war wounded.

The United States is considering whether to send peacekeeping forces to help end the carnage in the country founded in the 19th century by freed American slaves. West African nations plan to send 1,000 troops to Liberia within two weeks, negotiators meeting in nearby Ghana said Wednesday.

At the once-prestigious John F. Kennedy hospital — still partially ruined from Liberia's last 1989-96 civil war — shot-up patients were crammed into refurbished wards, some sleeping on mattresses on the floor.

In one partly abandoned section, the U.S. envoys crossed a water-flooded hallway by walking on top of benches.

During the latest round of fighting, civilians and wounded from both sides were brought here, sometimes still armed.

"They have guns, and you don't know if they will use them," said the hospital's chief administrator, Beuford Taylor.

Earlier Wednesday, exuberant Liberian villagers flooded a runway chanting, "We want peace, no more war," when another group of U.S. experts in military fatigues visited a Monrovia airfield to determine whether it could be used to bring in relief supplies and other material.

The United States faces mounting international pressure to send troops to lead a peacekeeping force in Liberia, a nation founded by freed American slaves in the 19th century. But Washington is wary of becoming too deeply involved in a West African conflict — especially with American troops already heavily committed in Iraq, Afghanistan and Kosovo.

U.S. President George W. Bush, speaking Wednesday in South Africa on the second stop of a five-nation African tour, promised to work with the United Nations and African countries to enforce an oft-violated June 17 cease-fire, and "see to see to it that Mr. Taylor leaves office so there can be a peaceful transition in Liberia." But he said he will not overextend U.S. armed forces.

Taylor — a one-time warlord wanted for war crimes in neighboring Sierra Leone — is viewed by international prosecutors, diplomats and some Liberians as the main impediment to peace in the region.

Under the cease-fire, Taylor promised to step down, clearing the way for a transitional government that will oversee fresh elections.

The United Nations and European leaders have sought U.S. troops to enforce the deal between forces loyal to Taylor and rebels surrounding his capital.

West African nations initially offered 3,000 troops and suggested the United States contribute 2,000. But negotiators meeting in nearby Ghana said Wednesday it would take too long and cost too much to mobilize a force of this size.

The West African regional bloc known as ECOWAS is now proposing to mobilize 1,250 soldiers — the first 1,000 of them within the next two weeks — and is asking the United States for 1,500, west African diplomats involved in the talks said on condition of anonymity.

Taylor has also urged the United States to send troops. On Sunday, he accepted an offer of asylum from Nigerian President Olusegun Obasanjo, but on condition that an international stabilization force is deployed to ensure an orderly transition.

Many fear Taylor's departure could spark the kind of factional violence that overran Monrovia during the last civil war.

Taylor has made it clear he still considers himself in charge of the country where he waged civil war for seven years as a rebel leader, before being elected president in 1997 with threats of plunging the country into bloodshed again if he lost.

Ex-combatants who fought for Taylor in the last war complained Wednesday of harassment by Monrovia's increasingly hostile population. Hundreds have sought sanctuary at an association of wounded war veterans.

The 32-member U.S. team — including military experts on civilian affairs and a security component — arrived Monday to assess security conditions in Liberia and humanitarian needs of its 3 million people.

The hospital they visited Wednesday is currently treating about 185 patients — half of them civilians, and half combatants — said Raed Aburabi, head of an International Committee of the Red Cross team providing surgery and trauma services. At the peak of fighting in June, about 400 were being cared for there.