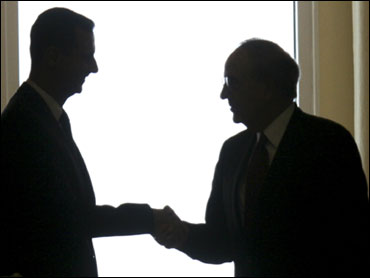 Five years after the United States pulled its envoy from Damascus in response to the assassination of Lebanon's prime minister, Washington is prepared to fill the post of Ambassador to Syria, CBS News has learned.

The U.S. had not had an ambassador in Syria since the Bush administration called back its envoy following the assassination of Lebanese Prime Minister Rafik Hariri in February 2005.

U.S. Middle East envoy George Mitchell named the new ambassador in a meeting with Syrian President Bashar Assad last week, according to an official who spoke to CBS News on condition of anonymity.

The United States has passed the name of a candidate to fill a post vacant for five years, and is waiting for feedback from Damascus, a State Department official revealed on Saturday.

"Yes, the request of the Ambassador was passed to the Syrians; however, we don't have any personnel announcement to make and we will not get into diplomatic exchanges," the official added, refusing to name the envoy, apparently until Washington hears back from the Syrian government.

But diplomats in the Syrian capital said Washington's intended Ambassador was Robert Stephen Ford, who until now has served as the deputy ambassador to Iraq.

Ford, who speaks Arabic fluently, has also served as the U.S. envoy to Algeria from 2006 to 2008, and is considered to be an expert in Mideast affairs.

"A decision was made last year to return an Ambassador to Syria and this is a concrete example of the administration's commitment to use our tools, including dialogue, to address our concerns," the official said in a telephone conversation.

"The decision reflects recognition of the importance of Syria's role in the region and we hope that it will play constructive efforts to promote peace and stability in the region," said the U.S. department official.

Mitchell's visit to Syria, the third since he was appointed as President Obama's envoy to the region, was to discuss how to re-launch the long-stalled Syrian-Israeli peace talks, and review bilateral relations.

Mitchell's trip comes following Israeli official statements that Turkey was no longer wanted as a mediator between the two countries.

Ankara brokered four rounds of indirect talks between the two countries in 2008 - the first such contacts since previous peace negotiations were broken off in 2000 over the fate of Israeli-occupied land in the Golan Heights, along Syria's border.

But Syria froze communication at the beginning of last year, when Israel launched a three-week devastating offensive against the Gaza Strip, controlled since June 2007 by the Islamic militant movement Hamas. Hamas' exiled leader, Khaled Mashaal, lives in Damascus.

Since being sworn in as president, Mr. Obama has cautiously sought to improve ties with Syria, and Congressional visitors have made a flurry of trips to Damascus. Deputy Foreign Minister Fayssal al-Mekdad, a leading figure in Syrian foreign policy, also visited Washington.

Arab diplomats suggest Syria might represent a slightly more attainable goal of the Obama White House's Mideast agenda - certainly when compared to the prospects of a breakthrough in Palestinian-Israeli peace negotiations.

Israel and its chief ally, the United States, want Syria to cool its ties with Iran, as well as to stop supporting the Palestinian Islamist group Hamas and Lebanon's Hezbollah movement and help sideline them as armed players.

Syria has appeared increasingly confident on the world stage, breaking out of its previous international isolation. Barely a day goes by without a Western politician or envoy knocking on Assad's palace door.

The American Under Secretary of State for political affairs William J. Burns was also said to turn up in Damascus next month for a new round of talks with the Syrians.

The U.S. has not had an ambassador in Damascus since in the wake of Hariri's February 14, 2005 assassination in a massive bombing in Beirut that also killed 20 others. made in a U.N. report implicating top Syrian and Lebanese intelligence officials in the explosion.