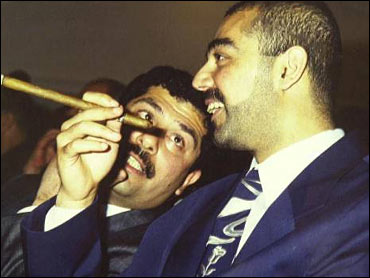 In Sadr City, a poor suburb of Baghdad formerly called Saddam City, some residents wanted to be sure Saddam's sons were dead.

To answer those doubts, Defense Secretary Donald Rumsfeld Wednesday said photos of the brothers will be released soon, reports CBS News Correspondent John Hartge. The secretary didn't specify exactly when the photographs would be released.

"The disbelief runs very deep, and it goes to the level almost of paranoia," Deputy Defense Secretary Paul Wolfowitz said Wednesday in a U.S. television interview after returning from a five-day tour of Iraq. "One of the great effects of [the raid] for Iraqis is to demonstrate our seriousness."

Meanwhile, a clearer picture is emerging of the raid that ended with the sons' deaths.

Four Humvees pulled up outside the handsome villa on Shalalat Street in Mosul Tuesday and disgorged a party of U.S. soldiers. Over a bullhorn, they told the occupants to come out with their hands up.

What followed was a firefight from the ground and air that reduced the comfortable villa to a smoking hulk and left Odai and Qusai, second in power only to their father, dead.

The Hussein brothers were Nos. 2 and 3 on the U.S. list of 55 most-wanted from the toppled Saddam regime. Guerrilla holdouts loyal to the regime have been attacking U.S. forces at a rate of about 12 times daily in an effort to wear down the American occupation and drive it from the country.

Lt. Gen. Ricardo Sanchez, commander of coalition troops in Iraq, said the brothers, along with two other Iraqis believed to be Qusai's teenage son, Mustafa, and a bodyguard, barricaded themselves on the second floor of a three-story home in Mosul. They were killed, he said, after anti-tank rockets were fired from Humvees during the sporadic four-hour siege.

The photos are likely to be gruesome because of the way the two men were killed.

A member of Iraq's governing council called the deaths of Saddam Hussein's sons a "devastating blow" to the former dictator.

The raid was a "turning point" in the campaign against Iraq's deposed regime, Sanchez said Wednesday in Baghdad. President Bush said it would help convince Iraqis that Saddam's regime is over for good.

The action that played out on the wide boulevard lined with villas, shops and a mosque began like countless others across occupied Iraq: with orders in Arabic to surrender.

"The intent is always to ask the people to come out voluntarily," said Col. Joe Anderson, commander of the 101st's 2nd Brigade.

The owner of the house, Sheik Nawaf al-Zaydan Muhhamad, walked out with his son Shalan, their hands on their heads, and were whisked away by troops, neighbors said Wednesday.

The other occupants were less cooperative. So after 10 minutes troops tried to enter the building. From the fortified middle floor of the three-floor building came Kalashnikov fire, raking the troops and wounding four of them. The Americans fell back to regroup and reinforcements were summoned.

The person who tipped the Americans off to the hideout is in protective custody, his identity a secret, U.S. authorities said.

Neighbors, however, suspect the tipster was Muhhamad, the house owner, who obeyed the surrender call. They said his wife and four daughters left the house several hours before the raid.

"There is a big question mark there. Did they know something would happen, or was it a coincidence?" said Nasser Hazim's brother, Ahmed. Anderson fueled the rumor when he was asked why the tipster was in protective custody.

"People know who owns the house, so that's a factor," he said.

He refused, however, to say whether Muhhamad, whom Iraqis said was a cousin of Saddam, was the tipster. If he was, he will apparently be entitled to a reward from the U.S. government of $15 million for each of Saddam's sons.

But, reports CBS News Correspondent Jim Stewart, sources say U.S. intelligence had already sniffed out the same lead and the tipster only confirmed their suspicions.

In a telephone interview with The Associated Press from his home in London, Izzedin Kamel Hassan al-Majid, a cousin of the two brothers, said Odai and Qusai were likely relaxing in the Mosul home when the American soldiers approached it.

"They went to this man in particular because he was a member of the family and they thought they could stay there for a while, be safe and then go somewhere else," he said.