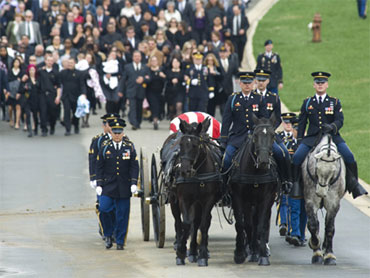 The number of U.S. troops killed in Afghanistan has roughly doubled in the first three months of 2010 compared to the same period last year as Washington has added tens of thousands of additional soldiers to reverse the Taliban's momentum.

Those deaths have been accompanied by a dramatic spike in the number of wounded, with injuries more than tripling in the first two months of the year and trending in the same direction based on the latest available data for March.

U.S. officials have warned that casualties are likely to rise even further as the Pentagon completes its deployment of 30,000 additional troops to Afghanistan and sets its sights on the Taliban's home base of Kandahar province, where a major operation is expected in the coming months.

"We must steel ourselves, no matter how successful we are on any given day, for harder days yet to come," Adm. Mike Mullen, chairman of the Joint Chiefs of Staff, said at a briefing last month.

In total, 57 U.S. troops were killed here during the first two months of 2010 compared with 28 in January and February of last year, an increase of more than 100 percent, according to Pentagon figures compiled by The Associated Press. At least 20 American service members have been killed so far in March, an average of about 0.8 per day, compared to 13, or 0.4 per day, a year ago.

The steady rise in combat deaths has generated less public reaction in the United States than the spike in casualties last summer and fall, which undermined public support in the U.S. for the 8-year-old American-led mission here. Fighting traditionally tapers off in Afghanistan during winter months, only to peak in the summer.

After a summer marked by the highest monthly death rates of the war, President Barack Obama faced serious domestic opposition over his decision in December to increase troops in Afghanistan, with only about half the American people supporting the move. But support for his handling of the war has actually improved since then, despite the increased casualties.

The latest Associated Press-GfK poll at the beginning of March found that 57 percent of those surveyed approved his handling of the war in Afghanistan compared to 49 percent two months earlier. The poll surveyed 1,002 adults nationwide and had a margin of error of plus or minus 4.2 percentage points.

Michael O'Hanlon, a foreign policy expert at the Brookings Institution, said the poll results could partly be a reaction to last month's offensive against the Taliban stronghold of Marjah in Helmand province, which the Obama administration painted as the first test of its revamped counterinsurgency strategy.

Some 10,000 U.S., NATO and Afghan forces seized control of the farming community of about 80,000 people while suffering relatively few deaths. But the Taliban continue to plant bombs at night and intimidate the locals, and the hardest part of the operation is yet to come: building an effective local government that can win over the loyalty of the people.

"My main thesis ... is that Americans can brace themselves for casualties in war if they consider the stakes high enough and the strategy being followed promising enough," O'Hanlon said. "But such progress in public opinion is perishable, if not right away then over a period of months, if we don't sustain the new momentum."

A rise in the number of wounded - a figure that draws less attention than deaths - shows that the Taliban remain a formidable opponent.

The number of U.S. troops wounded in Afghanistan and three smaller theaters where there isn't much battlefield activity rose from 85 in the first two months of 2009 to 381 this year, an increase of almost 350 percent. A total of 50 U.S. troops were wounded last March, an average of 1.6 per day. In comparison, 44 were injured during just the first six days of March this year, an average of 7.3 per day. 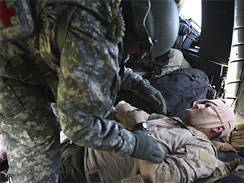 (AP Photo/Brennan Linsley)
The increase in casualties was partly driven by the higher number of troops in Afghanistan in 2010. American troops rose from 32,000 at the beginning of last year to 68,000 at the end of the year, an increase of more than 110 percent.

"We've got a massive influx of troops, we have troops going into areas where they have not previously been and you have a reaction by an enemy to a new force presence," said NATO spokesman Lt. Col. Todd Breasseale.

The troop numbers have continued to rise in 2010 in line with the recent surge. Defense Secretary Robert Gates said Thursday that a third of the additional forces, or 10,000 troops, are already in Afghanistan. They plan to have all 30,000 troops in the country before the end of the year.

U.S. officials have said they plan to use many of the additional forces to reassert control in Kandahar province, where the insurgents have slowly taken territory over the past few years in an effort to boost their influence over Kandahar city, the largest metropolis in the south and the Taliban's former capital.

Many analysts believe the Kandahar operation will be much more difficult than the recent Marjah offensive because of the greater dispersion of Taliban forces, the urban environment in Kandahar city and the complex political and tribal forces at work in the province.

The goal of both operations is to put enough pressure on the Taliban to force them to the negotiating table to work out a political settlement to end the war - a process the U.S. believes will only gain momentum once the militant group has lost traction on the battlefield.

"Until they transition to that mode, then we will have fighters ready to take shots at us and plant IEDs (improvised explosive devices)," said Lt. Col. Calvert Worth Jr., commanding officer of the 1st Battalion, 6th Marines Regiment in central Marjah.
By Associated Press Writer Sebastian Abbot