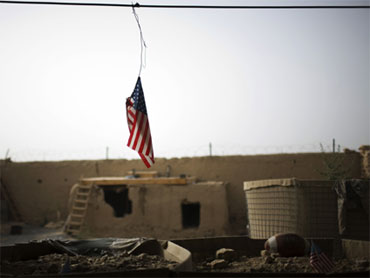 A U.S. service member died in a bomb attack in southern Afghanistan where fighting is escalating as Afghan and international forces push into areas long held by Taliban insurgents, the international military coalition said Thursday.

NATO did not release details about the service member's death on Wednesday, which brought to at least 17 the number of U.S. forces killed in Afghanistan so far this month. Sixty-six American troops died in July - the deadliest month for U.S. forces in the nearly 9-year-old war.

In Kandahar province in the south, eight NATO service members were injured when their helicopter made a hard landing during a joint Afghan and coalition operation. According to initial reports, the aircraft was not taking enemy fire. An investigation is under way.

CBS Evening News anchor Katie Couric is in Kabul, Afghanistan as we continue our special series, "Afghanistan: the Road Ahead". Watch "The Evening News" on Thursday for detailed reports from the battlefield and interviews with the key players.

In the east, a joint Afghan and NATO force killed 12 insurgents Wednesday in Puli Alam district of Logar province, the coalition said. Among those killed was Qari Muir, who had held several Taliban positions, including deputy shadow governor, military commander and the insurgent group's intelligence chief for Logar, NATO said.

The insurgents were observed preparing an attack on coalition forces and were killed in air strikes, the coalition said. A weapons cache, which included rockets, mines, ammunition and bomb-making equipment also was destroyed.

Also in eastern Afghanistan, coalition and Afghan forces killed three insurgents who were members of the fundamentalist Islamic group Jamaat-ud-Dawa, NATO said. Jamaat-ud-Dawa is a Pakistan-based group that is believed to be a front for Lashkar-e-Taiba, which India blames for the 2009 terror attacks in Mumbai that killed 166 people.

The insurgents, who were killed in fighting in Pech district of Kunar province, were members of a network linked to two rocket-propelled grenade attacks that killed two U.S. service members and wounded several others, plus various other attacks on Afghan and coalition forces.

NATO also reported that technical problems forced one of its unmanned aerial vehicles to make an emergency landing Wednesday in Kunduz province. The vehicle is a lightweight, medium-range reconnaissance and surveillance aircraft that is not armed.