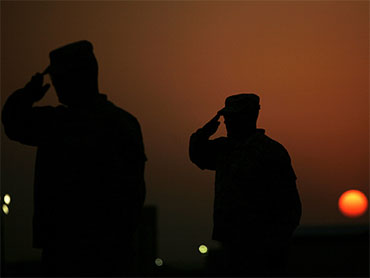 The number of U.S. troops in Iraq has fallen below 50,000 for the first time since the 2003 U.S.-led invasion and ahead of the end-of-the-month deadline mandated by President Barack Obama, the American military said in a statement Tuesday.

The number is a watershed in the more than seven years that the United States has been at war in Iraq. Under Mr. Obama's plan, American forces will no longer conduct combat operations but are instead to train Iraqi troops and help with counterterrorism operations - if asked for by the Iraqis.

"Today, in line with President Obama's direction and as part of the responsible drawdown of forces, U.S. military force levels in Iraq are below 50,000," the statement read.

Gen. Ray Odierno, the commanding general in Iraq, told reporters Tuesday that 49,700 troops are currently in Iraq and that the number would remain level through next summer.

The drawdown comes at a fragile moment in Iraq's history when many are wondering whether the country's tenuous security and democracy gains are at risk of backsliding. The country has gone almost half a year without a new government following the March 7 parliamentary elections.

The elections failed to produce a clear winner to lead Iraq as American forces withdraw, and frequent attacks by insurgents are raising doubts about the ability of Iraqi forces to protect the country in the absence of American backup.

Iraqi Prime Minister Nouri al-Maliki, whose State of Law Coalition garnered 89 seats in the election, has been battling to retain his office. A Sunni-backed coalition led by former prime minister Ayad Allawi, who is Shiite, won 91 seats in the balloting. But in Iraq's deeply fragmented political system that still adheres closely to sectarian politics, neither side has been able to pull together a majority coalition.

The political stalemate shows no signs of abating before Sept. 1, when Odierno will officially hand over responsibilities to Lt. Gen. Lloyd Austin III.

On Sunday, Gen. Ray Odierno, the top U.S. commander in Iraq, told CBS' "Face the Nation" that the U.S. may consider returning troops to the country if the Iraqi military asks.

"If they ask us that they might want us to stay longer, we certainly would consider that," Odierno told host Bob Schieffer. "That would obviously be a policy decision that would be made by the national security team and the president over time."

But in other interviews broadcast Sunday, Odierno said that it would take "a complete failure" of the Iraqi security forces for the U.S. to resume combat operations there.

"We don't see that happening," Odierno said, adding that the Iraqi security forces have been doing "so well for so long now that we really believe we're beyond that point."

The U.S. troop presence in Iraq has fluctuated over the years, reaching a high of nearly 170,000 troops in 2007 as part of the surge of forces intended to combat the insurgency and then slowly tapering off beginning in late 2008.

More than 4,400 American troops have died in Iraq since the March 2003 invasion, although troop deaths tapered off significantly after the U.S. pulled back from the cities in June 2009, in line with an Iraq-U.S. agreement governing American troop presence in the country.

The drop in troop levels signifies an important step for Mr. Obama, who was elected partially on a platform of promising to end the war. After taking office, Mr. Obama announced a plan to cease combat operations and drop the number of troops in Iraq to 50,000 by the end of August 2010.

Under the agreement between the U.S. and Iraq, all American troops must be out of Iraq by the end of next year. The troops now remaining in the country will mainly be responsible for training Iraqi security forces.

The 4th Stryker Brigade, 2nd Infantry Division, which was officially designated at the last combat unit to leave Iraq, drove out last week in their eight-wheeled Strykers.

However, in an indication of how difficult it is to firmly draw a line between what is considered combat and what is not, the American military will still be taking part in such missions as counterterrorism operations, if U.S. help is requested by the Iraqis.

Also, the Americans will continue to have the right to defend themselves and their military facilities - all actions that could still bring American troops into harm's way.