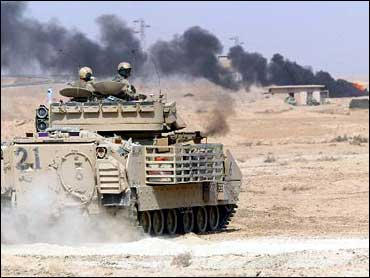 U.S. troops killed 11 Iraqis who ambushed a convoy on a highway north of Baghdad Friday, hours after mortar rounds slammed into a U.S. base in the same area, injuring 18 American soldiers, the military said.

Another U.S. soldier was shot and killed while guarding the Baghdad museum, the U.S. military said Friday.

The U.S. military said 11 men attacked the convoy with rocket-propelled grenades and small arms fire near Balad, 55 miles north of the capital. Soldiers of the Army's 4th Infantry Division fired back, killing all the men. None of the Americans was injured.

Two soldiers were seriously injured, with one undergoing surgery in a hospital located on the base and another evacuated for treatment, Bryja said. Others suffered cuts and small punctures from flying shrapnel, and nine soldiers quickly went back to duty, Army officials said.

Soldiers said flares and tracer bullets sliced across the night sky after the blasts.

"This is the first time the base was attacked — and the first time we've seen mortars," said Sgt. Grant Calease, who said he and other soldiers would nonetheless carry on with a July 4th steak barbecue.

The wounded soldiers belonged to Task Force Iron Horse, a 33,000-member unit that has been conducting raids in mainly Sunni Muslim central Iraq — the latest sweep aimed at putting down insurgents who have been staging daily attacks on American troops.