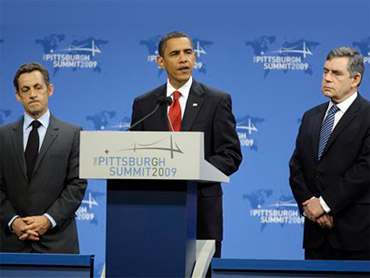 President Barack Obama and the leaders of Britain and France are publicly demanding that Iran open up a secret nuclear fuel facility to international inspectors.

Led by Obama at the site of the G-20 summit in Pittsburgh, French President Nicolas Sarkozy and British Prime Minister Gordon Brown joined the United States Friday in chastising Tehran for operating the facility covertly.

Obama said the site "deepens a growing concern" that Iran has failed to live up to its international obligations. He said that Iran "is breaking rules that all nations must follow, endangering the world non-nuclear proliferation regime ... and the security of the world."

The United States, the United Kingdom, and France have presented detailed evidence demonstrating that Iran has been building the covert site for several years, Mr. Obama said, and they expect the International Atomic Energy Agency to immediately investigate.

Iran has a right to peaceful nuclear energy, Mr. Obama said, but the size and configuration of this facility is inconsistent with a peaceful program.

"We remain open to serious, meaningful engagement with Iran" President Obama said. The revelation of the second facility, he said, adds new urgency to the Oct. 1 meeting of the five permanent U.N. Security Council members and Germany with Iran. "Obligations must be kept, and treaties will be enforced," Mr. Obama said.

Brown called Iran's nuclear program "the most urgent proliferation challenge the world faces today." He said the level of deception from the Iranian government and the scale of its breach of international standards "will shock and anger the international community" and harden the resolve of world powers to enforce stricter sanctions against Iran.

"The international community has no choice today but to draw a line in the sand," he said.

Sarkozy added that Iranian leaders must not be given too much time before action is taken against their nuclear program.

"If by December there is not an in-depth change... sanctions will have to be taken," he said.

The letter stated that the enrichment level would be up to 5 percent, and Iran told the agency that no nuclear material has been introduced into the facility, according to IAEA Spokesperson Marc Vidricaire.

"Iran assured the agency in the letter that 'Further complementary information will be provided in an appropriate and due time,'" Vidricaire said.

In response, the IAEA has requested Iran to provide specific information and access to the facility as soon as possible.

"This will allow the Agency to assess safeguards verification requirements for the facility," Vidricaire said.

Iranian officials had previously acknowledged having only one plant - one under IAEA monitoring - and had denied allegations of undeclared nuclear activities. Iran is under three sets of U.N. Security Council sanctions for refusing to freeze enrichment at that plant.

A senior U.S.official familiar with the intelligence on the Iranian nuclear facility describes it as "heavily protected and heavily disguised," CBS News White House correspondent Peter Maer reports. The official said the U.S.has been aware of the secret plant for "several years," and the administration wanted to use the intelligence for "building a case" against Iran. The intelligence might have stayed quiet if the Iranians had not learned that its secret was "compromised."

The administration provided a detailed briefing to the IAEA yesterday.

Another official describes next week's Geneva meeting with Iran involving the U.S., China, Germany, Russia, Britain and France as "a critical opportunity for Iran" to demonstrate a willingness to cooperate, Maer reports. The official says the coming weeks will see the U.S.and the other countries pursue a policy of "engagement and pressure" that could be followed by tougher sanctions.

She told reporters that Germany, Great Britain, France and the United States had consulted and agreed to a joint response. Merkel spoke separately from her counterparts because she had been in an already-scheduled meeting with Russian President Dmitry Medvedev.

She said "we will see" about the reactions of Russia and China, which also are part of the group of six but always more reluctant to take a firm line on Iran.

The senior administration official said Obama told Medvedev about the Iranian facility during their meeting earlier this week in New York. The Chinese are "just absorbing these revelations," the official said.

During Medvedev's talks with Obama, he opened the door to backing potential new sanctions against Iran, speaking just days after Obama's decision to scale back a U.S. missile shield in Eastern Europe that Russia strongly opposed. He followed with stronger statements Thursday, saying Russia would support international sanctions if other efforts failed. He said the U.S. and Russia must push Iran to make its nuclear program open and transparent.

On Friday in Pittsburgh, the Russian leader said the facility is "a source of serious concerns." He called on Tehran to act quickly to win the trust of the international community and "demonstrate readiness for full-scale cooperation," according to a statement quoted by the Russian news agency ITAR-Tass.

Beijing urged Iran to cooperate, but a senior Chinese official batted down the idea of punishing Tehran. "I think that all the issues can only be solved through dialogue and negotiation," Vice Foreign Minister He Yafei said.

Administration officials believe the disclosure about the secret plant will enhance the diplomatic leverage of the U.S. and its allies in dealing with the Iranian regime.

However, in an interview with Time magazine, Iranian President Mahmoud Ahmedinejad warned Mr. Obama not to press Tehran on the issue.

Claiming that Iran works within the framework of the IAEA, Ahmedinejad said Mr. Obama's pressure "simply adds to the list of issues to which the United States owes the Iranian nation an apology over. Rest assured that this will be the case. We do everything transparently."

Ahmadinejad took a softer tone on many matters while in New York for the U.N. meetings, emphasizing his interest in improving relations with the United States and expressing an openness to include nuclear matters on the negotiations agenda.

Still, he gave no sign that his country was willing to bargain away its nuclear program.

"We have not actually changed our mind," Ahmadinejad told CBS Evening News anchor Katie Couric in an exclusive interview before his address to the U.N. "Our nuclear program will be pursued in accordance to international law."