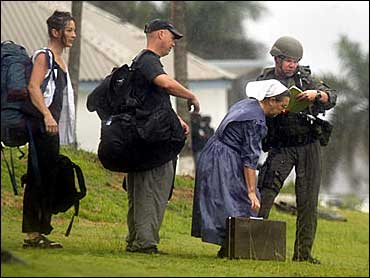 U.S. Secretary of State Colin Powell and U.N. Secretary-General Kofi Annan are trying to map out a way to revive a cease-fire in Liberia so peacekeeping troops can be sent in.

One goal of their five consecutive days of telephone consultation has been to start the West African country on a new political course that excludes President Charles Taylor, the State Department's spokesman said Tuesday.

"What they have been working on primarily is how to secure the deployment of the West African peacekeepers and what kind of support the United States can and should offer to that effort," spokesman Richard Boucher said.

Meanwhile, an amphibious group led by the helicopter landing ship USS Iwo Jima, carrying 2,000 Marines, was steaming in the Red Sea toward the Mediterranean to await orders on whether to continue around North Africa to Liberia.

U.S. officials had said previously that 4,500 American sailors and Marines have been ordered to position themselves closer to Liberia, if needed for an evacuation of Americans, peacekeeping or some other mission.

Sources tell CBS News, however, that President George W. Bush is in no hurry to put these troops on the ground in Liberia; he wants them to go in as "peacekeepers, not peacemakers."

Some Pentagon officials said Mr. Bush was inclined to send in a smaller contingent — perhaps several hundred Marines — only enough to provide command and communications support for an African peacekeeping force.

Once again, Mr. Bush delayed a decision as international aid workers spoke out with anguish that without peacekeeping troops it was extremely difficult to help desperate Liberians caught in the crossfire in the capital, Monrovia.

Three U.S. Agency for International Development officials were denied permission to go to Liberia from Sierra Leone to make assessments because of the lack of security. No U.S. aid currently is being delivered, a U.S. official said.

American diplomats in Dakar, Senegal, held parallel talks with African officials about the makeup of a peacekeeping force if and when a cease-fire can be revived.

With the death toll mounting, and relief workers saying they could not help thousands of desperate Liberians in the absence of peacekeepers, the administration gave no indication government and rebel forces could be persuaded to stop fighting.

In fact, Boucher suggested long rounds of negotiations were in prospect. "There are a lot of pieces of this that have to come together," he said.

"Have we gotten to the more robust aspect of this? Not yet," the spokesman said.

Mr. Bush has offered to augment a West African force of peacekeepers, but White House spokesman Scott McClellan indicated there was no decision whether U.S. combat troops or support units would be sent to Liberia.

The White House Tuesday described the situation in Liberia as "dynamic," reports CBS News Correspondent Peter Maer. McClellan said the president still has not decided whether to send U.S. troops to stabilize the situation. He insisted the U.S. is "actively engaged" in diplomacy to end the fighting.

"We strongly condemn the latest round of cease-fire violations and the escalating violence," McClellan said. "We continue to call on all parties to immediately cease all military activities and focus on the peace talks."

Liberian Defense Minister Daniel Chea claimed the death toll was well over 600 people, but there was no way to independently confirm the figure. Aid groups and hospitals have put the number of dead above 90, but say they expect the number to rise.