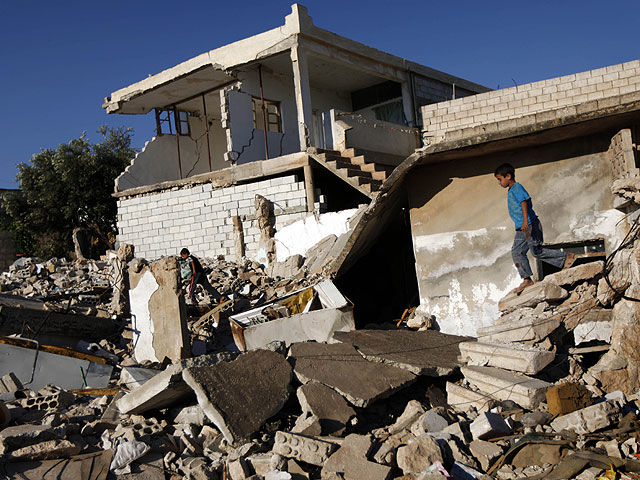 (CBS/AP) WASHINGTON - The Obama administration is warning Syria that U.N. sanctions may be near, as Secretary of State Hillary Rodham Clinton heads Wednesday to Turkey to talk strategy with America's allies and look for a way to win Russia's support for a transition plan ending the Assad regime.

The threatening message was delivered by Treasury Secretary Timothy Geithner, who called for the world to exert "maximum financial pressure" on Syrian President Bashar Assad's government after 15 months of violence. He argued that "strong sanctions can help hasten the day the Assad regime relinquishes power," but acknowledge that financial and diplomatic penalties alone cannot bring the needed political change.

"We gather in the shadow of a massacre, and nothing we say can adequately respond to such an event," Geithner said, referencing the killing of 108 civilians in Houla last month. "Nor can sanctions alone bring about the change we seek. But sanctions can pay an important role."

Geithner said that unless Syria demonstrates "meaningful compliance" with U.N. efforts to end the violence, the U.S. and other countries will "soon join in taking appropriate actions against the Syrian regime, including, if necessary, Chapter 7 action in the U.N. Security Council." A Chapter 7 resolution authorizes actions that can ultimately include the use of military force, which administration officials — for now — are playing down as a possibility, and which Russia and China have voted down before.

But Treasury officials said the U.S. goal in seeking U.N. action is global sanctions and not a military intervention in Syria.

He also urged those nations who have yet to sever economic ties with Syria to adopt formal sanctions.

"We see no justification for allowing senior members of the Assad regime to have the benefit of accessing the global financial system," he said.

The White House would not detail possible new action against Syria at the United Nations or elsewhere.

"All options with regard to Syria are being discussed," press secretary Jay Carney told reporters traveling with Obama for political fundraising on the West Coast.

"We are constantly looking for ways to work with our international partners to further isolate and pressure Assad to get him to cease the brutal campaign against the Syrian people and to allow for the political transition that's already under way to be completed," he said.

Speaking to reporters before leaving Azerbaijan for Turkey, Clinton said "it's time for all of us to turn our attention to an orderly transition of power in Syria that would pave the way for democratic, tolerant, pluralistic future."

Clinton said she would consider more international conferences to devise a plan on Syria. But apparently referring to Russia's suggestion of broader talks that would include Iran, Clinton said: "It's a little hard to imagine inviting a country that is stage-managing the Assad regime's assault on its people," but noted she would gauge progress as they move forward.

Despite widespread international condemnation of its actions, Syria's government has survived through a combination of brutal repression and the political backing of Moscow. Along with China, Russia has twice blocked U.N. condemnations and punitive actions against the regime.

Looking for a way forward, Clinton is meeting Wednesday evening in Istanbul with like-minded European, Turkish and Arab officials hoping to advance a political transition strategy. The latest talk has focused on a plan such as the one agreed to last year by Yemen's former dictator Ali Abdullah Saleh, whose resignation allowed his vice president to form a caretaker interim government.

But Assad has balked at such proposals, and the U.S. and its allies have yet to persuade the Kremlin to drop its support for the Syrian leader.

In recent days, Clinton has sought to open the door to a compromise with Russia, calling Assad's ouster a necessary outcome of any political transition but not necessarily a "precondition."

The nuance suggests the U.S. is willing to allow Assad to hang on in power for part of a structured regime change. But the administration is also making it clear that Assad's eventual departure must be agreed on by all parties as part of the transition, and that it cannot accept Russian ideas about promoting reform or greater dialogue in Syria as a substitute for true political change.

Meanwhile, Assad on Wednesday appointed a loyalist Baath party member as prime minister. Assad had promised after the parliamentary elections to make the government more inclusive to politicians from other parties. But the appointment of Baathist Riad Farid Hijab, a former agriculture minister, raised questions about his commitment to that idea.