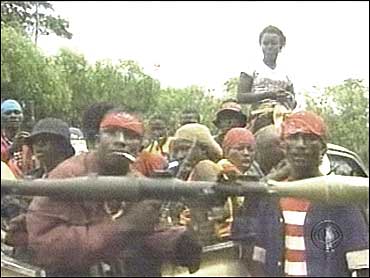 The State Department urged rebels in Liberia to hold their fire Monday if they expected to be part of a future government, insisting "the cease-fire needs to be upheld" after the U.S. Embassy compound was hit. A decision on dispatching African and U.S. peacekeepers to the chaotic country remained on hold.

A State Department spokesman, Philip T. Reeker, criticized the rebel group Liberians United for Reconciliation and Democracy for "reckless and indiscriminate shooting" and appealed to neighboring African countries to guard against weaponry going to Liberia.

President Bush said he had sent more Marines in to protect the U.S. Embassy, and 4,500 more American sailors and Marines were ordered into positions closer to the west African country.

Speaking to reporters at his ranch in Crawford, Texas, President Bush indicated he had not yet decided the size of a U.S. force that might be sent to help a promised West African peacekeeping mission in Liberia.

But sources tell CBS News Mr. Bush is in no hurry to put these troops on the ground in Liberia; he wants them to go in as "peacekeepers, not peacemakers."

"We recognize the dangers there," Reeker said when asked if the embassy would remain open.

A mortar round hit an apartment building on the main embassy grounds and another hit a house on the embassy's annex compound, An unidentified U.S. citizen was wounded as he ran to take cover in the embassy. Liberians were reported killed after a shell hit an American compound where they had taken refuge across the street.

Secretary of State Colin Powell conferred by telephone for a fourth consecutive day with U.N. Secretary-General Kofi Annan, while Mr. Bush continued to withhold a decision on sending American peacekeepers.

The international relief agency Oxfam pleaded with the Bush administration to "show its hand" and commit American peacekeepers under a multinational umbrella.

"It's terrifying and incredibly frustrating," said Oxfam project officer Sam Nagbe in Monrovia, where he was trapped by the fighting. "People here are really suffering, but as long as the fighting continues we are unable to help them. We need international peacekeepers now, not in one month or two months' time."

Defense Secretary Donald H. Rumsfeld signed a deployment order over the weekend ordering a three-ship amphibious ready group from its position off the Horn of Africa into the Mediterranean Sea, defense officials said Monday. That would put the group in a position to get to the west coast of Africa faster, if needed for an evacuation of Americans, for peacekeeping or for some other mission.

Angry Liberians lined up at least 18 bodies outside the U.S. Embassy compound, after a shell hit an American diplomatic compound across the street, where at least 10,000 refugees had taken refuge.

Spokesman Reeker lectured the rebels that "they need to think about the plight of the civilian population, the humanitarian workers who are there to alleviate suffering."

Shifting the target of U.S. rhetoric from President Charles Taylor to the rebels, Reeker said, "If we're to trust them in the future to participate in the democratic governance of Liberia, we need to be able to see them keep their commitments now."

So, Reeker said, "we're calling upon the leader of the LURD group to immediately halt that offensive, and for all Liberians to re-energize their efforts in achieving a peaceful, negotiated settlement" through talks held in Ghana.

Meanwhile, Taylor, who could face war crimes prosecution, remained in Liberia despite a pledge to leave.

There are 2,000 Marines and 2,500 sailors in the group, led by the USS Iwo Jima, which has been in the Horn of Africa region as part of the global war on terrorism. It would typically be only the Marines who would go ashore.