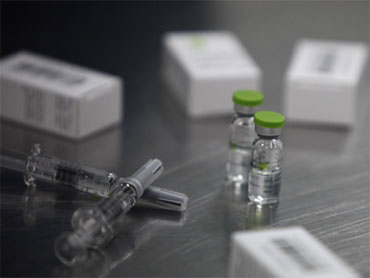 (AP Photo/Elizabeth Dalziel)
The White House announced today that the United States will share 10 percent of its H1N1 flu vaccine with other countries.

In a release, the Obama administration said it was taking the action in recognition of the fact that "diseases know no borders and that the health of the American people is inseparable from the health of people around the world."

The U.S. is taking the action in concert with Australia, Brazil, France, Italy, New Zealand, Norway, Switzerland, and the United Kingdom. The vaccine will be made available to other countries on a rolling basis, as supplies become available, through the World Health Organization.

The Department of Health and Human Services and the National Institutes of Health announced last week that the vaccine would only need to be given once, not twice, in order to be effective for most people.

The administration expects the vaccine to be made available within weeks. It predicted that "the United States will have sufficient doses of the vaccine to ensure that every American who wants a vaccine is able to receive one."