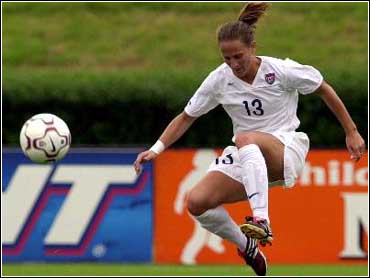 In their first game as the Olympic team, the U.S. women rediscovered their scoring punch in a big way.

Tiffeny Milbrett had two goals and an assist, and Cindy Parlow also scored twice as the United States beat Russia 7-1 Sunday in the first game of a kickoff tour ahead of next month's Olympic Games in Sydney.

Julie Foudy, Mia Hamm and Michelle Akers also scored as the U.S. team ended a streak of five consecutive games - all during a wearying trip to Europe - in which they had scored only one goal per match.

For Akers, who played the second half, it was her first goal of the year, completing a comeback from shoulder surgery in April.

Granted, the competition Sunday wasn't on the level of the European trip, which included games against Olympic medal favorites China and Norway. The Russians didn't qualify for the Olympics, and their tired play was indicative of a team that had arrived after a transatlantic journey only three days earlier.

The teams will meet again Tuesday at College Park, Md., in a match closed to the public. The "Nike Road to Glory" tour continues with a game against Canada at Kansas City, Mo., next Sunday and ends with a sendoff match against Brazil at San Jose, Calif., Sept. 1.

The Americans, 21-4-5 this year, will open Olympic play Sept. 14 against Norway at Melbourne, Australia.

Coach April Heinrichs chose her Olympic roster Thursday, and the team has much the look as the one that won the World Cup last year. Heinrichs used all seven substitutes, including backup goalkeeper Briana Scurry.

Before 21,278 at the Navy-Marine Corps Memorial Stadium, Milbrett gave the Americans the lead in the 11th minute with an 11-yard bouncing header perfectly placed just inside the left post. Shannon MacMillan supplied the cross from the left wing.

Foudy made it 2-0 with her 35th international goal in the 24th minute. After back-to-back corner kicks, Hamm's cross from the left was punched by goalkeeper Tatiana Repeikina and volleyed by Brandi Chastain to Foudy, who was waiting by the left post for the close-range header.

Hamm supplied the assist for Milbrett's 79th international goal in the 50th minute, chipping from the left side of the box to anticipate Milbrett's short run. Repeikina stayed back, leaving Milbrett an easy 6-yard shot to make it 3-0.

After that, the Americans scored almost at will. Danielle Slaton fed Parlow, who one-touched the ball with her right instep from 5 yards, in the 73rd.

Akers made it 6-1 in the 77th, her 105th career goal, and Parlow got her second of the match two minutes later to complete the scoring.