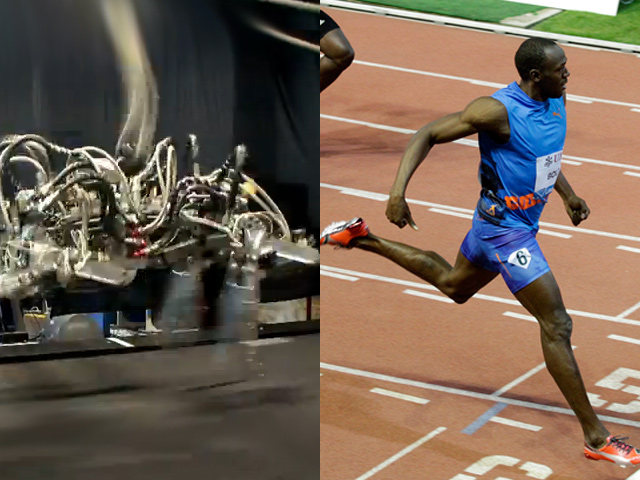 (CBS News) Did you happen to watch the Olympics this summer? Or else the one back in 2008? Well, even if you didn't, chances are that you're aware that Jamaican sprinter Usain Bolt is very, very fast. I mean like superhero fast (I'm looking at you Flash and Superman). But, as it seems to turn out, he's not quite as fast as the Cheetah Robot in the video above. Check it out.


The awesome, scientific, geek-out video was posted to YouTube by Boston Dynamics who write:

Cheetah Robot is a fast-running quadruped developed by Boston Dynamics with funding from DARPA. It just blazed past its previous speed record, getting up to 28.3 mph, about 0.5 mph faster than Usain Bolt's fastest 20 meter split. This version of the Cheetah Robot runs on a treadmill with offboard power. Testing on an untethered outdoor version starts early next year.

So if Usain Bolt does decide to become a superhero, are we looking at his future arch-nemesis? Or is this the start of a beautiful friendship and possible future sidekick? Okay, probably neither... but only time will tell. On a serious note, if you'd like to learn more about the Cheetah Robot and other robotics being developed by Boston Dynamics, you can visit their website by clicking here.