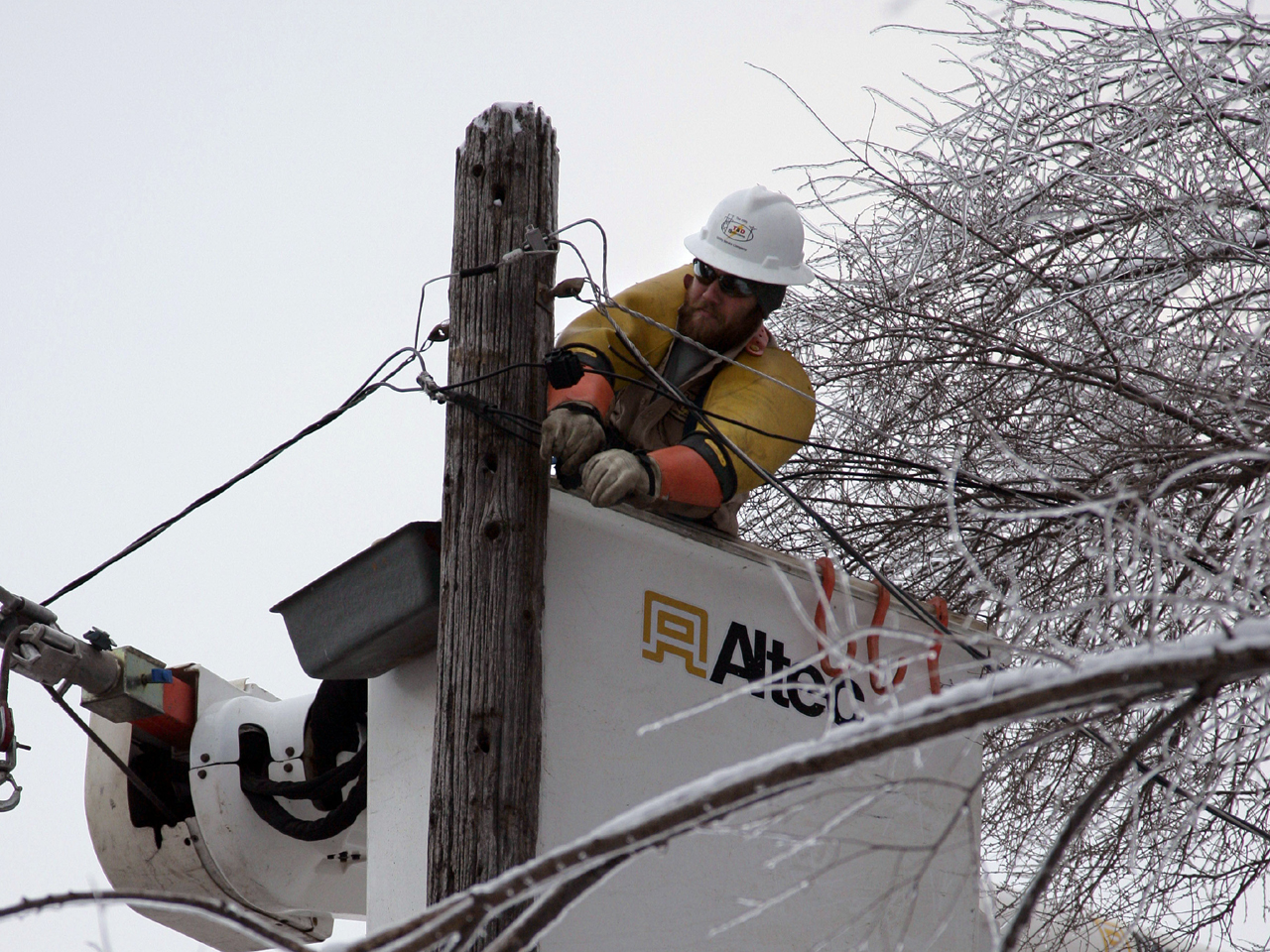 DETROIT - When an ice storm glazed over Michigan last weekend, Tony Carone feared he wouldn't be spending Christmas at home with his family.

"Nobody had to call. I heard it on the top of my roof," Carone said.

The 52-year-old lineman for Detroit-based DTE Energy is one of the thousands of electrical workers who have put in double shifts trying to restore power to more than a half-million homes and businesses. Outages stretched from the Great Plains to Maine and into eastern Canada.

"My power went out the same time as everybody else's," Carone said of the power to his Lapeer home, north of Detroit. It was about 7:30 a.m. Sunday, while he was on the phone with his utility's area leader. He walked out the door a half-hour later and has been working 16 hours a day ever since.

The storm has been blamed for 17 deaths in the U.S. and 10 in Canada. Five people apparently died from carbon monoxide poisoning tied to using generators.

Michigan bore the brunt of the storm as nearly 600,000 homes and businesses lost power, and as of Friday morning, about 64,000 customers remained in the dark. Maine reported almost 12,000 outages and in eastern Canada, nearly 62,000 still hadn't had their power restored, including 33,000 in Toronto.

It could have been worse, said Paul Graham, a lineman supervisor from Massachusetts whose crew was helping out in Gardiner, Maine.

"If it was a little more ice, poles would have been broken," Graham said. "Things would be on the ground. ... If there was another quarter of an inch or a half-inch of ice, people would've been out for a long, long, long time. But I'm sure no one is thinking they're lucky, right?"

Many families affected by the outages sought refuge with relatives or hunkered down with generator-powered space heaters and fireplaces to keep warm. Utility officials say it could be days before power is restored to everyone.

The linemen face a dangerous and physical task, below-freezing temperatures aside. Ice can weigh down power lines so much that they break, or tree branches can fall and take the lines with them. So, the linemen must clear some debris, if needed, and then shimmy up slick utility poles to restring lines using belts and spiked boots.

"You have to take your time. You have to watch what you're doing," said Carone, who was working in Columbiaville on Thursday. "It's not a good feeling, climbing up an icy pole."

A lineman fell Tuesday from a ladder in Lansing, suffering broken ribs and a shoulder injury.

"It underscores the inherent dangers that linemen face in restoration efforts in a storm like this," Lansing's Board of Water & Light spokesman Stephen Serkaian said.

"It was miserable. Friday night it was the freezing rain coming in," Morrall said. "You look up and you can barely see out of your safety glasses. When we were working Sunday in Muskegon, you could see the branches breaking. You hear a big old crash, thinking 'I hope these branches don't break over our heads.'"

Morrall, 51, was able to spend time Christmas Eve and Christmas Day with his family in Muskegon. Other than that, it's mostly been hotel and motel rooms.

"Our families pretty much understand that's our job to go out and get the lights on. ... It's almost like being a fireman. You're there for public service."

Consumers Energy had about 2,500 employees, contractors and workers from outside Michigan in the field. DTE Energy has about 1,500 focused on restoration efforts.

But in a twist of holiday spirit, Morrall said his crew's morale was lifted Wednesday by grateful homeowners who had been using generators for heat, light and cooking.

"There were no restaurants open anywhere," he said. "We had just put the power on to this neighborhood and these people brought over plates of food with turkey, ham, green bean casserole. We did get a Christmas dinner."