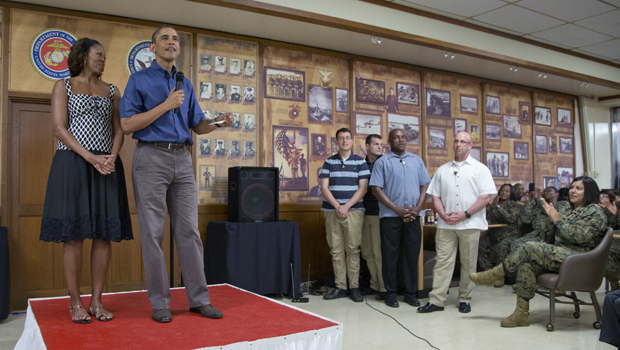 KANEOHE BAY, Hawaii --  President Obama stepped away from the seclusion of his quiet Hawaii vacation for what's become a Christmas tradition: paying tribute to U.S. troops and the sacrifices their families make during the holidays and throughout the year.

After a morning of presents and carols with their two daughters, the president and first lady Michelle Obama took a short drive to Marine Corps Base Hawaii, where nearly 600 troops and their families gathered in a mess hall, half-eaten pieces of cake still on the table from Christmas dinner.

"Michelle and I know that we would not enjoy the freedoms we do if it weren't for the incredible dedication and professionalism and work that you do," Mr. Mr. Obama said. "The least we can do is just let you all know we're grateful to you."

Mr. Obama, dressed informally in dark pants and a blue shirt, called out the names of some of the military units stationed here, prompting loud whoops from the troops. He recalled speaking by phone on Christmas Eve with 10 service members stationed in places like Afghanistan, Saudi Arabia and Bahrain.

"It was just a sampling of the incredible sacrifice that you and your families make every single day," Mr. Obama said. The Hawaiian-born president wished the troops a "mele kalikimaka" — a local phrase for "Merry Christmas" — before he and Mrs. Mr. Obama spent about two hours posing for photos.

The visit to this wind-swept base on a peninsula on Oahu has become almost a ritual for Mr. Obama, who seeks refuge from the stresses of Washington during his annual vacation in Hawaii. He frequently visits the base's golf course and gym.

It's also one of the few moments when Mr. Obama appears in a public setting during his trip. Aside from a basketball game and dinner at a Honolulu restaurant, the Obamas have remained largely out of sight since arriving here over the weekend. Mr. Obama has played a round of golf nearly every day and the first family has spent much of the time at a vacation rental in an upscale neighborhood in Oahu.

This year's vacation comes at the end of a particularly vexing year in which a gun control push failed, an immigration overhaul stalled and the rollout of Mr. Obama's signature health care law crashed and burned. Reflecting on the year as he prepared to depart for Honolulu, Mr. Obama said he'd have better ideas for approaching next year "after a couple days of sleep and sun."

Among the troops Mr. Obama called Tuesday were those wounded over the weekend during a mission to evacuate Americans from South Sudan. Four troops were injured in that effort, but the White House has said they are in stable condition.

Mrs. Obama did not speak publicly during the stop at the Marine base, but in a Christmas video message released Wednesday, she said now that more troops are home from wars in Iraq and Afghanistan, the nation must find new ways to give back.

"It's our turn to step up and show our gratitude for the military families who have given us so much," she said.

The Obamas are expected to remain in Hawaii through Jan. 5.