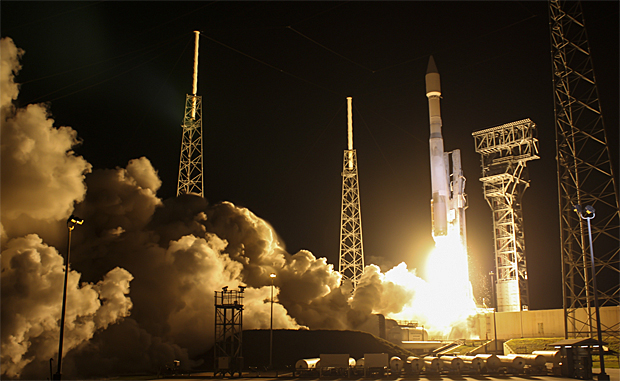 Trouble with a propellant mixture valve in a Russian-built RD-180 engine powering the first stage of an Atlas 5 rocket triggered a premature shutdown during a space station resupply launch March 22, the rocket builder said Friday.

The Atlas 5's Centaur second stage made up for the performance shortfall and burned longer than planned to boost the Orbital ATK Cygnus supply ship into the proper orbit for rendezvous with the International Space Station. But downstream Atlas flights were put on hold pending an investigation into what triggered the premature shutdown.

United Launch Alliance has now "reviewed the data and has determined an anomaly with the RD-180 mixture ratio control valve (MRCV) assembly caused a reduction in fuel flow during the boost phase of the flight," ULA said in a statement. "In addition to analysis and testing, all RD-180 engines are being inspected."

Launch of an Atlas 5 carrying the fifth Mobile User Objective System -- MUOS -- military communications satellite, originally scheduled for May 5, was put on hold and is now expected to fly in June. The rocket's first stage was erected at ULA's Vertical Integration Facility near the launch pad last Friday.

With the rocket now vertical, engineers will carry out a detailed inspection "and confirm all engine components are ready for launch," ULA said.

The impact of the delay on ULA's remaining 2016 launch schedule is not yet known, but the company said "all missions manifested for 2016 are expected to be successfully executed by the end of the year," including a NASA science mission with a tight launch window in September.

The RD-180, the most powerful engine currently powering a U.S. launch vehicle, generates 860,000 pounds of thrust at liftoff burning liquid oxygen and highly refined RP-1 kerosene fuel. Going into the March 22 launch, it had chalked up 67 problem-free flights in a row.

Even so, the RD-180 has come under intense political fire in recent years after competitor SpaceX, claiming ULA held an unfair monopoly on high-priority military launches, raised questions about relying on a Russian-built engine to boost U.S. national security satellites into orbit.

SpaceX eventually won approval to bid on military launch contracts and earlier this week, the Air Force announced the company had won an $82.7 million contract to launch a next-generation Global Positioning System navigation satellite in 2018. Eight more military contracts will be announced later this year, all of them open to competition.

As for the Atlas 5, there is widespread political support for replacing the RD-180 with an American engine and Sen. John McCain, a fierce critic of ULA's use of the Russian powerplant, has led the charge to halt purchases of new engines for downstream flights.

But opponents counter that more engines are needed to keep the Atlas 5 flying until a replacement can be built, tested and certified for military flights.

ULA is in the process of designing a new rocket, known as the Vulcan, that eventually will replace the Atlas 5 and ULA's more expensive Delta 4 rockets. Blue Origin, a company owned by Amazon-founder Jeff Bezos, is building a new high-performance engine for the Vulcan and Aerojet Rocketdyne is designing a new engine that also could be incorporated.

Lawmakers want the Vulcan ready to fly in 2019, "but the Air Force and ULA argue that it will take 2-3 more years before a launch vehicle using the new engine is certified to launch expensive national security satellites," according to SpacePolicyOnline. "They want to buy up to 18 more RD-180 engines to ensure the Atlas 5 is available until Vulcan is certified."

McCain and like-minded representatives believe only nine more engines should be allowed. But early Thursday, the House Armed Services Committee approved an amendment boosting the number of RD-180s allowed from nine to 18.