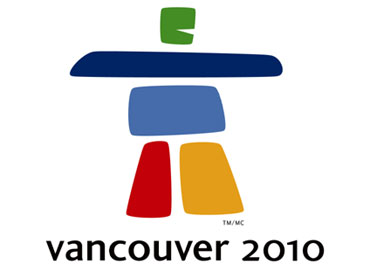 The emblem of the Olympic Winter Games is a colorful humanoid with arms spread wide, a contemporary interpretation of a stone landmark called an inukshuk with a history stretching back more than 3,000 years in Inuit culture.

Sitting atop the Olympic Rings, the symbol looms large on licensed merchandise and is sure to generate curiosity once the Games are under way.

An inukshuk is a carefully balanced pile of unworked rocks and slabs. The Inuit have built them through time to guide travelers, assist with hunts, warn of danger or indicate caches of food. A miniature version stands hip-high, with others measuring 3 to 6 feet tall, one builder said.

With a more human look, the design for the Olympic emblem was chosen in 2005 from about 1,600 proposals to represent hope, friendship, hospitality and teamwork, according to Vancouver organizers. Named Ilanaaq, meaning friend, it was cast in Canada's red and two shades of blue, along with green, yellow and gold, to evoke the host country's sweeping forests, mountains, islands and sunsets.

Towering examples of inuksuit (the plural) have been constructed in modern times, like the sculpture located in Vancouver on English Bay, left over from the 1986 World Expo. Other First Nations peoples in Arctic regions from Alaska to Greenland also used such markers, and they can be found elsewhere around the world, including one on the summit of Pike's Peak, in Colorado, and elsewhere in the western United States, where they were built by Navajo and other Native Americans.

In the Inuit culture, inuksuit played a key role for the nomadic people in the frozen, unforgiving climate of northern Canada and were built to withstand winds of more than 90 mph, said Peter Irniq, an inuksuit builder, former commissioner of the northern Nunavut Territory and an Inuit cultural teacher who lives in Ottawa.

"They're symbols of survival," he said. "Whenever I'm around inuksuit in the Arctic I am never scared because I know that Inuit have lived there before me for many, many thousands of years and have survived from hunting and fishing," he said.

Norman Hallendy, who has written two books on the subject, said the markers served a multitude of roles.

"It was really part of their life support system," he said. "Some were reminders of a dangerous place, some pointed to the safest or easiest ways to get home."

Along some Arctic coastlines, the more human-looking form was once thought to be put up to proclaim to Scottish whalers, "OK, we're here, which meant they could stop and trade for fresh caribou or take some people on board as pilots," Hallendy said.

In years past, one Inuit use for human-looking rock structures was far more solemn, Irniq said.

"When Inuit made them a long time ago, they represented murder and it also represented suicide, that there was murder or there was suicide at that place," he said.

The day-to-day inuksuit took on different shapes, depending on their function. Some were built with peepholes or windows to look through in a certain direction, revealing good places to find seal, caribou or Arctic char. It could have been placed equidistant from prime fishing or hunting grounds or had one slab extended to indicate direction.

For stores of kill too burdensome to carry, an inukshuk sometimes included antlers on top to make the spot easier to find under snow and ice, Hallendy said.

For hunting, since the Inuit lived in small groups, the piled landmarks were placed in lines along each side of caribou routes. Women and children hid behind them, waiting patiently for the beasts to arrive and startling them into believing there were more people. The spooked caribou were forced in the direction of men waiting with bows and arrows.

In Cape Dorset, a center of Inuit art at the tip of Baffin Island in Nunavut, Inukshuk Point is home to more than 100 of the markers and has been designated one of Canada's national historic sites.

"That is one of the most sacred sites in the entire eastern Arctic," said Hallendy, who lives far away in the small village of Carp, 35 miles from Ottawa, but has traveled to the north many times. "It is very, very moving. When you go there, you're almost struck dumb by the power of the place. You can feel it. You can see it. It's a very inward and a very quiet experience."

Inukshuk, he said, could also be venerated, honored with offerings of food or a lock of hair, or considered evil or good.

To Hallendy, the markers will always be most special in their natural surroundings. Some, he said, have generated mini-ecosystems of their own. Seed-laden bird droppings have led to flowers and other life around the base against an otherwise desolate landscape.

"You get a whole bloody tiny little universe that begins to live at the feet. The Arctic is virtually a desert, but you have this incredible, beautiful little micro world that's lush with things. It's a magical world."