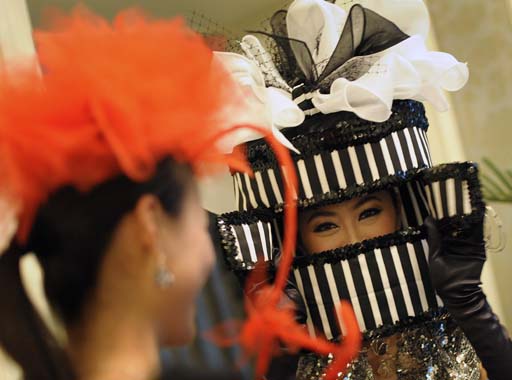 With temperatures soaring, tempers are flaring as the Vatican's dress police turn back tourists in shorts and bare shoulders trying to get into St. Peter's Basilica.

"I am born naked and the church wants me to be wearing pants," Danish tourist Kenneth Bergen, 53, proclaimed to a throng of would-be visitors who had been turned back. Bergen had just bought a pair of paper pants.

Enforcement of the dress turns into a battle each summer, but the verbal skirmishes have been heightened this July because Rome has been in the grips of a relentless heat wave.

For weeks, temperatures have reached into the 90 degrees Fahrenheit each day and the thousands of tourists trudging through the streets seem dressed more for a day at the beach -- shorts, miniskirts, tank tops for both men and women. The city's policemen have been out in force to assure tourists don't cool off their feet in the Trevi Fountain and other landmarks.

At the Vatican, authorities have erected signs showing that no one can enter the basilica with bare legs and bare shoulders. Guards --neatly dressed in shirts and ties -- patrol the entrances.

Showing true entrepreneurial spirit, vendors have popped up at various points around the vast square, keeping one step ahead of the police.

A student identifying himself as Marko from Yugoslavia, visiting the Vatican with his grandmother, plunked down a euro for paper pants, but promptly ripped them as he tried to pull them up above his shorts. A vendor reluctantly reached into his black plastic bag for another pair.

"The information we got was that the dress code only applied when the pope was here," said Becky Haskin, 44, visiting from Fort Worth, Texas, with three friends.

Blocked on their first attempt, they bought a pair of paper pants and two shawls. "It was worth it," she said.

Not only the Vatican but the diocese of Rome and its hundreds of churches require what authorities consider appropriate dress. But unlike the Vatican, most of the churches cannot afford guards and -- in the heat of this summer -- they have become cool refuges for the barely clad.

Some tourists do come prepared, pulling out pants and shirts from their backpacks and changing in St. Peter's Square, often prompting whistles and cat calls from onlookers.