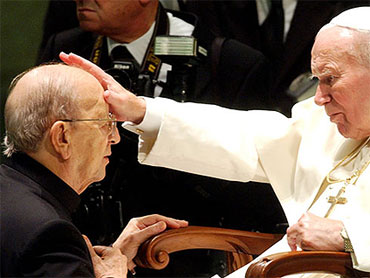 Vatican investigators have completed their probe into the Legionaries of Christ, the conservative order once hailed by Rome that fell into scandal after it revealed that its founder had fathered a child and had molested seminarians.

The Vatican said Tuesday its five investigators are to report back to Rome this week about their study of the Legionaries 120 seminaries, schools and communities around the globe. In a statement, the Legionaries said the first phase of the inquiry was over and that a final report would still take several months for Rome to complete.

While the Vatican's recommendations are unknown, Vatican analysts have speculated that the Holy See might appoint a new leadership for the order and outline a series of reforms. Its recommendations will be closely watched, given the current focus on the Vatican's handling the growing sex abuse crisis convulsing the church in Europe.

Pope Benedict XVI ordered the probe last year after the Legionaries acknowledged its late founder, the Rev. Marcial Maciel of Mexico, had fathered a daughter and had sexually abused seminarians. Since then, a Mexican woman has come forward saying she had a lengthy relationship with Maciel, that he fathered her two sons, adopted a third and sexually abused two of them.

The disclosure of Maciel's double life has caused enormous turmoil inside the Legionaries and its lay affiliate, Regnum Christi, particularly because information initially released by the leadership was less than forthcoming. The order had essentially created a personality cult around Maciel, teaching that he was a hero whose life should be studied and emulated.

In the wake of the revelations, the order has taken down pictures of Maciel that used to adorn its institutes, edited its Web sites and reviewed editions of books that heavily quoted from Maciel's writings, the Legionaries' New York and Atlanta directors wrote in a letter to Regnum Christi members in September.

Still, several U.S. dioceses have either restricted the Legionaries' work or set limits on its recruitment practices. The archdiocese of Miami has barred Legionaries priests from exercising any ministry whatsoever.

The Vatican investigation was extraordinary since it only launches a so-called "apostolic visitation" when it considers a group unable to correct a major problem on its own.

In 2002, at the height of the clergy sex abuse scandal in the United States, the Vatican ordered an evaluation of all U.S. seminaries. More recently, it has ordered one for U.S. women's religions orders.

Five bishops appointed by Rome spent eight months visiting Legionaries communities to get firsthand knowledge of the order and its work. In a statement Tuesday, the Legionaries said over the next several months there may be further communications between the investigators and Rome before the pope "gives the instructions that he considers suitable and necessary."

Even after the revelations came out, questions remained about whether any current leaders covered up Maciel's misdeeds and whether any donations were used to facilitate the misconduct or pay off victims.

One of the Mexican sons allegedly fathered and abused by Maciel, Jose Raul Gonzalez, has said he asked the Legionaries of Christ for $26 million because Maciel had promised him a trust fund when he died and as financial compensation for the alleged sexual abuse.

The Legionaries was formed in 1941 and became one of the most influential and fastest-growing orders in the Roman Catholic Church. Pope John Paul II championed the group, which became known for its orthodox theology, military-style discipline, fundraising prowess and success recruiting priests at a time when seminary enrolment was generally dismal.

The group says it now has some 800 priests and 2,600 seminarians worldwide, along with 75,000 Regnum Christi members.

Yet the order and Regnum Christi had detractors throughout its rise. Critics condemned the group's secrecy vows, revoked in 2007, that barred public criticism of a superior, and its practice of limiting contact between seminarians or Regnum Christi members and their families.

The Vatican began investigating allegations against Maciel in the 1950s, and again in 1998 after nine former seminarians said Maciel had abused them when they were boys or teenagers in Catholic seminaries in Spain and Italy from the 1940s through the 1960s. Later, others came forward.

But it wasn't until 2006, a year into Benedict's pontificate, when the Vatican instructed Maciel to lead a "reserved life of prayer and penance" in response to the abuse allegations.

Meanwhile, sex abuse scandals throughout Europe continue to weigh on the Vatican.

Germany's most prominent Roman Catholic youth organization said it is hoping for Pope Benedict XVI to speak out on the church's sexual abuse scandal in his home country.

The group BDKJ's head Dirk Taenzler told The Associated Press Monday he is hoping for guidance because everyone in the Catholic Church is appalled and worried about the recent surge of sex abuse cases in German church institutions.

And Pope Benedict is expected to release a letter that will address clerical sex abuses in Ireland in a "clear and decisive voice," a top Vatican official said Monday.

Benedict is expected to release his letter soon in response to decades of systematic abuse in church-run schools and other institutions in predominantly Roman Catholic Ireland.