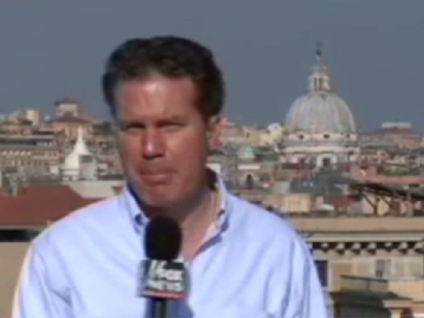 (AP) VATICAN CITY - The Vatican has brought in the Fox News correspondent in Rome to help improve its communications strategy as it tries to cope with years of communications blunders and one of its most serious scandals in decades, officials said Saturday.

Greg Burke, 52, will leave Fox to become the senior communications adviser in the Vatican's secretariat of state, the Vatican and Burke told The Associated Press.

"I'm a bit nervous but very excited. Let's just say it's a challenge," Burke said in a phone interview.

He defined his job, which he said he had been offered twice before, as being along the lines of the White House senior communications adviser: "You're shaping the message, you're molding the message, and you're trying to make sure everyone remains on-message. And that's tough."

Burke, a native of St. Louis, Missouri, is a member of the conservative Opus Dei movement. Pope John Paul II's longtime spokesman, Joaquin Navarro-Valls, was also a member of Opus Dei and was known for the papal access he enjoyed and his ability to craft the messages John Paul wanted to get out.

After Pope Benedict XVI was elected in 2005, Navarro-Valls was replaced by the Rev. Federico Lombardi, a Jesuit who had long headed Vatican Radio and still does, along with running the Vatican press office and Vatican television service.

Lombardi confirmed the news after the AP broke the story, several days before the Holy See had planned to announce it officially.

The Vatican has been bedeviled by communications blunders ever since Benedict's 2005 election, and is currently dealing with a scandal over Vatican documents that were leaked to Italian journalists. While the scandal is serious — Benedict himself convened a special meeting of cardinals Saturday to try to cope with it — the Vatican's communications problems long predate it.

Benedict's now-infamous speech about Muslims and violence, his 2009 decision to rehabilitate a schismatic bishop who denied the Holocaust, and the Vatican's response to the 2010 explosion of the sex abuse scandal are just a few of the blunders that have tarnished Benedict's papacy.

Even the Vatican's response to the leaks from within the Vatican of sensitive papal documents hasn't involved a terribly sophisticated public relations strategy. Just last week the Vatican No. 2, Cardinal Tarcisio Bertone, blamed the media and the devil for fueling the scandal and accused journalists of "pretending to be Dan Brown."

Brown wrote "The Da Vinci Code," the best-selling fictional account that portrayed Opus Dei — of which Bertone's new communications adviser is a member — as being at the root of an international Catholic conspiracy.

Burke acknowledged the difficult task ahead but said that after turning down the Vatican twice before, he went with his gut and accepted the third time around. "This is an opportunity and challenge that I'm not going to get again," he said.

He said he didn't know what, if any, role his membership in Opus Dei played. Opus is greatly in favor in the Vatican these days, particularly as other new religious movements such as the Legion of Christ have lost credibility with their own problems. Currently, for example, the cardinal who is heading the Vatican's internal investigation into the leaks of documents is the Opus Dei prelate, Cardinal Julian Herranz.

"I'm an old-fashioned Midwestern Catholic whose mother went to Mass every day," Burke said. "Am I being hired because I'm in Opus Dei?" he asked. "It might come into play." But he noted he was also in Opus when he was hired by Fox and Time magazine.

Burke has been a Fox correspondent since he joined the U.S. network in 2001. He was the Time magazine correspondent in Rome for a decade before that.

At Fox, he led the network's coverage of the death of John Paul and election of Benedict in 2005, and has covered the papacy since then, traveling with the pope around the globe. But he has also used Rome as a base for non-Vatican reporting, including several stints in the Middle East during the last intifada, labor law protests in France and the terrorist attacks in London and Madrid.

He is a graduate of Columbia University's School of Journalism.