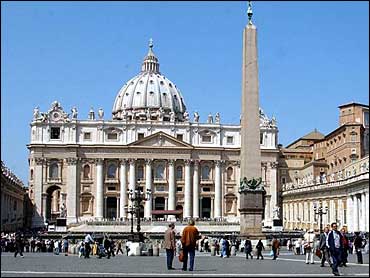 The Vatican reported a deficit for the second consecutive year Wednesday - about $15 million - blaming the shortfall on heavy personnel costs and the Holy See's expanding diplomatic mission.

But it said contributions last year to the pope, donations known as Peter's Pence, were slightly up, an increase that would belie fears of a sharp drop in giving because of the sex abuse scandal in the United States and other countries.

The Vatican presented its annual financial report a day before a scheduled news conference to discuss the figures.

The Vatican went through 23 money-losing years until 1993. The situation turned around after bishops from around the world agreed to directly assist the Vatican.

But it found itself in the red again in 2001, blaming the deficit on the worldwide financial slump aggravated by the Sept. 11 attacks.

The report said the Vatican had heavy personnel costs - it employs 2,659 people in Rome alone - while it faced new costs for building more diplomatic missions. The Holy See maintains relations with more than 120 nations.

The report did not give a breakdown by country, but said the total received for Peter's Pence was about $53 million, up nearly 2 percent from 2001.

"The data confirms the generosity of many people of goodwill," the report said. The statement said the money went for charity works in the developing world and for relief aid for wars and natural disasters.

Historically, dioceses and individuals in Germany and the United States have been the biggest givers.

In a separate accounting, the report said the Vatican city-state was also in deficit, by some $18 million, attributing it to falling revenues and the costs of running Vatican Radio.