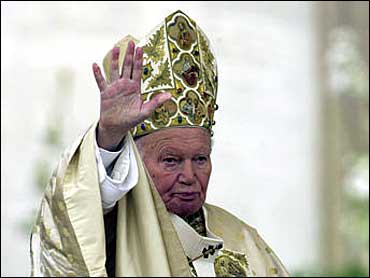 The Vatican launched a global campaign against gay marriages Thursday, warning Catholic politicians that support of same-sex unions was "gravely immoral" and urging non-Catholics to join the offensive.

The Vatican's orthodoxy watchdog, the Congregation for the Doctrine of the Faith, issued a 12-page set of guidelines with the approval of Pope John Paul II in a bid to stem the increase in laws granting legal rights to homosexual unions in Europe and North America.

"There are absolutely no grounds for considering homosexual unions to be in any way similar or even remotely analogous to God's plan for marriage and family," the document said. "Marriage is holy, while homosexual acts go against the natural moral law."

The issue is particularly charged in the United States, where some lawmakers in the House of Representatives have proposed a constitutional ban on gay marriages to counter state laws granting legal recognition to gay unions.

President Bush said Wednesday that marriage was defined strictly as a union between a man and a woman and said he wants to "codify that one way or the other."

The Vatican document, "Considerations Regarding Proposals to Give Legal Recognition to Unions Between Homosexual Persons," sets out a battle plan for politicians when confronted with laws or proposed legislation giving homosexual couples the same rights as married heterosexuals.

It also comes out strongly against allowing gay couples to adopt, saying children raised by same-sex parents face developmental "obstacles" because they are deprived of having either a mother or a father.

"Allowing children to be adopted by persons living in such unions would actually mean doing violence to these children, in the sense that their condition of dependency would be used to place them in an environment that is not conducive to their full human development," it said.

The document says Catholic politicians have a "moral duty" to publicly oppose laws granting recognition to homosexual unions and to vote against them if proposals are put to a vote in legislatures.

If the laws are already on the books, politicians must speak out against them, work to repeal them and try to limit their impact on society, it said.

"To vote in favor of a law so harmful to the common good is gravely immoral," the document said.

The document doesn't provide for specific penalties for Catholics who fail to oppose such laws, saying only that the lawmakers had a "moral duty" to vote against them.

The Vatican said its guidelines were not only intended for Catholic lawmakers but for non-Christians and everyone "committed to promoting and defending the common good of society" since the issue concerned natural moral law, not just Church doctrine.

The document doesn't contain any new Church teachings on the issue, repeating much of the Vatican's previous comments on homosexuality and marriage, which it defines as a sacred union between man and woman designed to create new human life.

In a footnote citing a 1992 comment on the topic, the document also noted that there was a danger that laws legalizing same-sex unions could actually encourage someone with a homosexual orientation to seek out a partner to "exploit the provisions of the law."

But legal acceptance is growing.

Two Canadian provinces - Ontario and British Columbia - have legalized homosexual marriage under recent court rulings, a move that has attracted gays from across the border in the United States.

Earlier this month, a top German cardinal condemned Germany's same-sex marriage law after it was upheld by the country's Supreme Court, calling it a blow to the family.

"Now the associations of homosexuals have a potent arm to obtain further concessions on the road toward full equality with married couples, including the right to adoption," Cardinal Karl Lehman complained in a Vatican Radio interview.

The Vatican is particularly worried about the waning influence of the church in Europe. Drafters of a proposed constitution for the European Union ignored Vatican requests to include explicit mention of Europe's Christian roots.

Recently, the pope lamented that the church's message is being watered down in Europe.

On Thursday, a small group of demonstrators from Italy's Radical Party held up banners at the edge of St. Peter's Square to protest the document. The banners read "No Vatican, No Taliban," and "Democracy Yes, Theocracy No."

Other opposition to the document came from the Green Party in predominantly Catholic Austria. Ulrike Lunacek, a party spokeswoman, said Catholic politicians should follow human rights conventions, "not the old-fashioned views of the Vatican."

"This hierarchy, which also rules on other issues like forbidding the use of condoms to avoid AIDS, is far from reality," she said in a statement issued earlier this week after the Vatican announced the document's release.