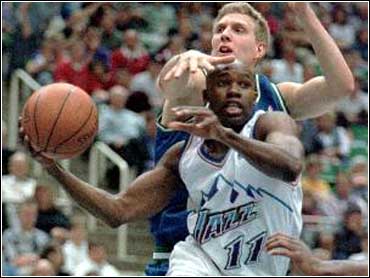 The free agent was expected to sign the contract Tuesday and take a physical.

The deal raises questions about the future for Utah's other free agent point guard, Howard Eisley.

Asked what Vaughn's signing means for Eisley, O'Connor said: "We're committed to making whatever improvements we need to help us put the best team on the floor."

Utah has offered Eisley a four-year, $20 million deal. Fegan reportedly has sought up to $36 million for six years.

O'Connor said talks are continuing with free-agent forward Danny Manning, waived last week by the Milwaukee Bucks after he negotiated a buyout for the final year of his contract.

Stockton, 38, is entering the final year of a two-year contract. He has said he will decide after next season whether he wants to continue playing.

Vaughn's return assures Utah of a point guard who knows coach Jerry Sloan's system. And Vaughn, 25, will get the additional playing time he wanted.

In his third year after being drafted from Kansas, Vaughn played in 78 games last season. He averaged 11.3 minutes, 3.7 points and 1.6 assists while shooting 41.6 percent.

The Boston Celtics recently put Vaughn through a workout at his home in California, with only salary-cap exceptions of $2.25 million and $1.2 million available to offer him.