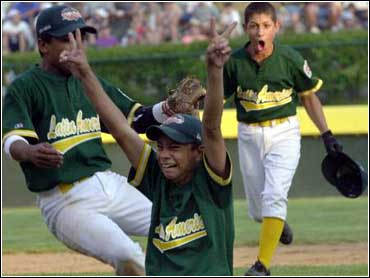 The team from Maracaibo, Venezuela, is going home with a big haul: the Little League World Series title, following Saturday's 3-2 win over Bellaire, Texas, and an entire shipment of new bats.

Maracaibo, which arrived in central Pennsylvania with only one bat, got new ones through donations from equipment companies, and used those acquisitions to full effect.

"He hasn't used that bat anymore," said Luis Sanchez, interpreting for Maracaibo manager Eduvino Quevedo. "He soon found out that the other bats were more explosive."

It wasn't Maracaibo's bats that clinched them the title, as two wild pitches and an error led to their three runs.

Ruben Mavarez pitched a four-hitter, struck out six and also doubled and scored as Venezuela claimed its second World Series championship in six years and fifth overall for Latin America.

The game ended in dramatic fashion as Bellaire missed a chance to tie it in the bottom of the sixth when Alex Atherton singled and Nick Wills hit a two-out single, advancing Atherton to third.

With the crowd of 42,000 on its feet, Mavarez ended the game and threw up his glove in the air by striking out Hunter Johnson.

With Mavarez kneeling on the mound, the team came charging and piled up on top of him. Left fielder Marcel Prado came out carrying a Venezuelan flag, while the Bellaire players sat and watched in the dugout.

"It's another big step in his baseball life," Mavarez said, through Sanchez. "A very good step. Not many persons have had an opportunity to be in a World Series."

Adrian Chourio singled and scored for Maracaibo, while Mavarez picked up his second win of the week.

Bellaire failed to become the first Texas team to win the Series in 34 years.

"We got the runner to third and a passed ball or anything would have tied it up," Bellaire manager Terry McConn said. "Maybe we would've scored another run that inning or gone into extra innings. But we just didn't have it. ... Yeah, we would have liked to have won it, been the Little League World Series champions.

Atherton, who led the team with two hits, pitched a two-hitter and struck out 12, but was undone by his team's miscues.

"He threw good enough to win," McConn said. "I mean, two hits, we made a couple of errors and a couple of passed balls and they scored a couple of runs off of them. If we had stopped that we might have won 2-0."

Maracaibo never trailed after going up 2-0 in the first inning when Atherton loaded the bases and then threw two consecutive wild pitches.

It's been quite a ride for Maracaibo, which is expecting a trip tthe capitol and a meeting with the president. Not bad for a team whose flight from Venezuela had to turn back because of mechanical problems, and lost its Series opener 10-0 to Tokyo.

His throat dry, Quevedo said he told everyone from the beginning his team had what it took to win.

Sierra Maestra-Maracaibo is the ninth Venezuelan team to reach the Series, and second to claim the title after Coquivacoa-Maracaibo won it all in 1994.

The win was the 28th by international representatives, versus 26 won by U.S. teams.

Two Texas teams have won the championship, the last being Westbury American-Houston, in 1966.

Prior to the game, Hall of Famer George Brett was awarded the Bill Shea Distinguished Little League Graduate Award, which recognizes former Little Leaguers who have attained respected public status.

"Determination and teamwork represent the spirit of Texas. I commend you for your hard work and dedication," Bush wrote. "You make the Bellaire community and the Lone Star State proud."