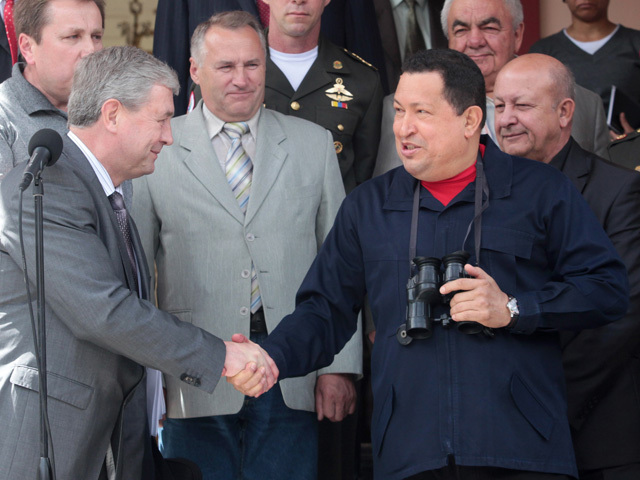 (AP) CARACAS, Venezuela - Venezuelan President Hugo Chavez said Saturday that he has undergone tests following his cancer treatment and everything came out well.

Chavez said the exams included imaging tests, which are used to check for the reappearance of tumors.

"Everything came out absolutely fine," Chavez told reporters at the presidential palace. "I feel very well."

Chavez appeared on the palace steps after a meeting with a Russian delegation. He saw off the visiting officials and then appeared energetic as he stepped close to reporters and animatedly responded to questions about his health, oil prices and his plans ahead of the country's October election.

"We're going to win this battle on Oct. 7," Chavez said. Motioning to the presidential palace, he said, "the bourgeoisie will never again return to this building."

Chavez accuses his rival, opposition leader Henrique Capriles, of representing the interests of the wealthy. Capriles, a moderate, plans to register his candidacy Sunday after leading a march of supporters through the city to the elections office. Chavez is scheduled to sign up as a candidate Monday.

The president returned home from Cuba on May 11 after what he said was his latest round of radiation therapy, and since then has limited his public appearances while saying little about his illness.

In the past year, Chavez has undergone two surgeries that removed tumors from his pelvic region, most recently in February. During Chavez's yearlong cancer struggle, he has not disclosed some details about his illness, including the type of cancer or the precise location of the tumors.

Chavez was asked Saturday about recent remarks by World Bank president Robert Zoellick, who in a speech said he believed "Chavez's days are numbered."

"To foolish words, deaf ears. I think the one that has its days numbered is global capitalism, of which the World Bank is a part," Chavez said.