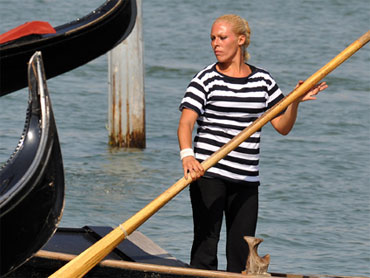 Venice is on its way to having its first official female gondolier.

City Hall said Friday that Giorgia Boscolo had passed the practical exam to become a gondolier. She is the first woman to pass this test, considered the most difficult of those required to pilot a boat on Venice's canals.

Boscolo must pass one further test, a written, multiple-choice exam, in order to join the guild of official gondoliers.

Deputy Mayor Sandro Simionato says her success breaks "900 years of male dominance" in the profession, and that it will likely inspire more women to try.

A German woman once won the right to transport guests of a Venice hotel, but only aboard the hotel's gondola.

According to the ANSA news agency, Boscolo is a 24-year-old mother of two.