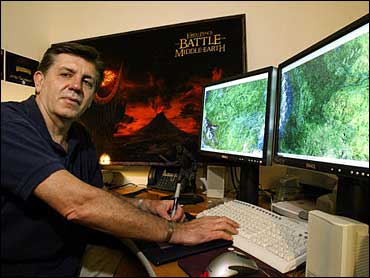 The video game industry was once an afterthought in Hollywood, at most an ancillary source of revenue like action figures. The people passionately developing the computer-based form of entertainment were seen as dorks compared with the celebrities.

Now that games have matured into a $11 billion business, topping movie box-office sales and siphoning television viewers, the lucrative and increasingly influential genre has attracted more star power than ever.

Pierce Brosnan, Jet Li and Cameron Diaz, among others, have lent their voices and likenesses to games. Acclaimed film directors such as the Wachowski brothers shot footage not just for "The Matrix" films but also for the game based on the movies.

Games are no longer the follower, either. The "Van Helsing" video game was released the same day as the movie this month. Soon, more blockbuster game franchises, such as "Halo" and "Doom," are expected to become the basis of movies.

After a long courtship, these two industries have become intertwined in a young marriage, under the common law of entertainment.

"Everyone is realizing that games are making money - if not more money than films," said Brad Foxhoven, president of Tiger Hill Entertainment LLC. "And when you talk to people who own blockbusters like `Grand Theft Auto' or `Halo,' you have to realize that perhaps the film is what's considered ancillary now."

Case in point: Foxhoven founded Tiger Hill with film director John Woo to create original content for games that they hope will become franchises for movies or TV.

Signs of the lovefest were everywhere at last week's Electronic Entertainment Expo, or E3, in Los Angeles. Games based on "Shrek 2," "Spider-Man 2" and "The Lord of the Rings" movies had top billing, and actor Vin Diesel was promoting one based on the movie "The Chronicles of Riddick." Diesel owns Tigon Studios, the game's developer.

The convergence of games and movies is about both creativity and money - made possible now that games have better graphics and the potential for more cinematic environments and storytelling.

"The development of a video game allows me to tell stories in ways I never before thought possible," said Woo, who directed "Mission Impossible 2" and decided to get into gaming after attending E3 in 2002. "It is like making a film with 10 acts instead of three and action scenes that go on forever."

Veteran screenwriter David Freeman got his first taste when he was asked to help rewrite the script for Atari Inc.'s "Enter the Matrix." Since then, he's worked on a dozen other movie-based games, including "Van Helsing" and "Shark Tale."

He has tailored his writing technique into a game trademark, calling it "emotioneering," and hopes it'll help evoke in players the same emotional depth they have traditionally experienced only in film and TV.

Game developers have also encroached upon Hollywood to more easily work with and poach talent from the movie industry. In what entertainment attorney Damon Watson recently dubbed the "Joystick Corridor," the stretch from San Diego to Los Angeles now hosts more than 70 companies tied to video games.

Among the Hollywood migrants to full-time game work: Richard Taylor, who worked on special effects for the first "Lord of the Rings" movie and the upcoming film "Chronicles of Narnia," and Richard Kriegler, an art director for "Star Trek: Insurrection." Both are now art directors at the shiny new Los Angeles studio of the leading video game publisher, Electronic Arts Inc.

"Consumers are no longer consciously differentiating what they see in a movie and what they're playing on a game," said Mark Skaggs, Electronic Arts' producer of the game "The Lord of the Rings: Battle for Middle-earth."

With video games stealing more audience time, a Hollywood talent agent like Larry Shapiro finds plenty of open doors in his mission to introduce the stars of game development to the power brokers of movies and television.

One of Shapiro's latest matchmaking projects: a development deal between the creator of "The Sims," the all-time best-selling computer game, and the producers of "The Simpsons" hit TV series.

It's a far different picture than 15 years ago, when Electronic Arts secured a groundbreaking licensing deal with star football coach John Madden. "He was a celebrity and we were a bunch of schmucks," recalls EA co-founder William "Bing" Gordon.

The flirting between the two industries, some say, dates back to the early '80s, when Atari licensed the "Star Wars" name for its arcade game in 1983 and when Atari's "Cloak and Dagger" became a movie with Dabney Coleman the following year.

But even when video game revenues first overtook movie box-office receipts four years ago, Hollywood's interest was tepid. The studios' failed efforts in the early '90s to produce their own video games were still in mind.

Fueled in part by the introduction of CD-ROMs, a slew of film studios invested tens of millions of dollars to establish interactive game shops, only to fold them a few years later amid flops such as a science-fiction game from Steven Spielberg and LucasArts, "The Dig," and Walt Disney Co.'s interactive version of "The Lion King."

The only reason actor James Earl Jones agreed to do the voice-over for the 1999 game title "Tiberian Sun" was because his son liked the game, Skaggs said.

Celebrities are much less reluctant now that the Madden NFL video game and dozens of others are proven blockbusters. The casts of "CSI," "Alias" and "ER" are all on board for video game versions of their TV shows.

Jason Hall, former head of game developer Monolith Productions Inc. and now chief of Warner Bros.' new game division, said the studio turned down an opportunity to develop "Matrix"-based games a few years ago. Today, it would jump at that chance, he said.

"Now it's changed to directors, actors and producers who are very interested in having their content transmute from film into the game space," he said. "It's gone as far as wanting to produce a game first."

The benefits of collaboration are mutual.

This synergy is also natural for the new generation of Hollywood executives and artists who have grown up around video games, talent agent Shapiro said.

"Look at any actor's trailer or writer's room," he said, "and you'll always see a game console in there."