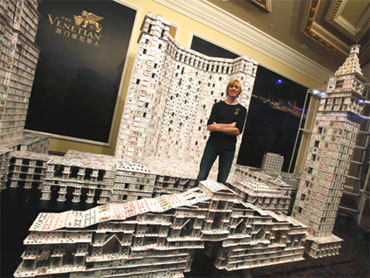 A 34-year-old American has broken his own world record by building the largest free-standing house of playing cards ever recorded.

Bryan Berg set the new Guinness World Record Wednesday by building a giant replica of the Venetian Macau hotel and casino inside the resort in China's gambling hub.

"I can't help it, I was trained as an architect and I have taken just enough structural engineering to be dangerous," said Berg, who has a master's degree from Harvard's Graduate School of Design. "When I'm in there working - figuring out how to build something - even though I'm sort of playing around with playing cards, it's really like a real construction project. Because you have to engineer every single adjacency and every support that's supporting everything above."

Berg had some close calls during construction - including several collapses.