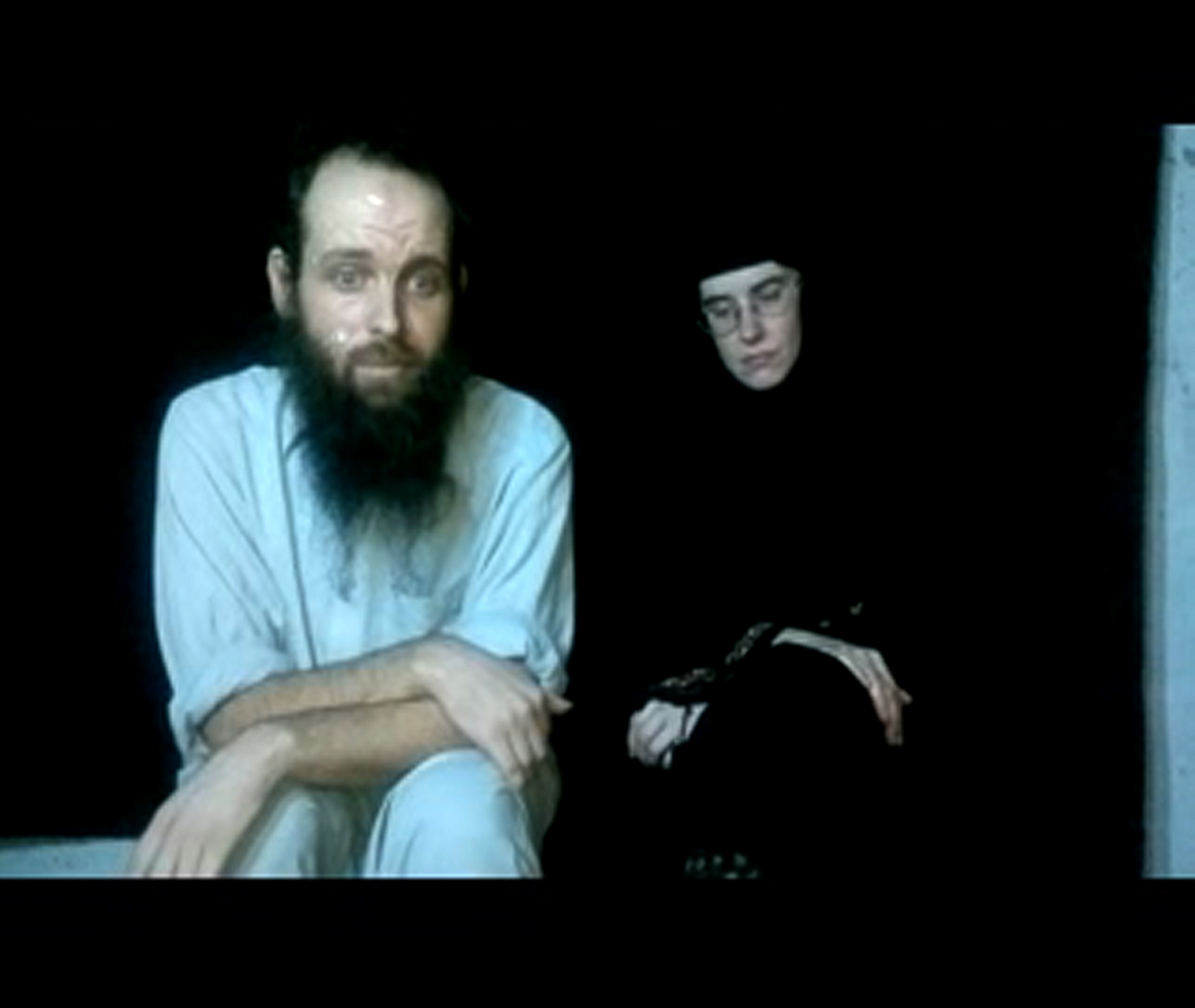 WASHINGTON -- The family of a pregnant American woman who went missing in Afghanistan in late 2012 with her Canadian husband received two videos last year in which the couple asked the U.S. government to help free them and their child from Taliban captors, The Associated Press has learned.

The videos offer the first and only clues about what happened to Caitlan Coleman and Joshua Boyle after they lost touch with their families 20 months ago while traveling in a mountainous region near the capital, Kabul. U.S. law enforcement officials investigating the couple's disappearance consider the videos authentic but say they hold limited investigative value since it's not clear when or where they were made.

The video files, which were provided to the AP, were emailed to Coleman's father last July and September by an Afghan man who identified himself as having ties to the Taliban but who has been out of contact for several months. In one, a subdued Coleman - dressed in a conservative black garment that covers all but her face- appeals to "my president, Barack Obama" for help.

"I would ask that my family and my government do everything that they can to bring my husband, child and I to safety and freedom," the 28-year-old says in the other recording, talking into a wobbly camera while seated beside her husband, whose beard is long and untrimmed.

The families decided to make the videos public now, in light of the publicity surrounding the weekend rescue of Army Sgt. Bowe Bergdahl, who was freed from Taliban custody in exchange for the release of five high-level Taliban suspects at Guantanamo Bay, Cuba. The families say they are disappointed that their children and grandchild were not freed as part of the same deal but are still holding out hope for the U.S. and Canadian governments to secure their release on humanitarian grounds.

Republicans in Congress have criticized the Bergdahl agreement and complained about not being consulted, though Obama has defended it, citing a "sacred" obligation to not leave men and women in uniform behind. Rep. Duncan Hunter, R-Calif., asked Obama in a letter this week why other Americans still in the custody of Afghan militants were not included in the negotiation. The families say their children, though without political or military ties to the government, are prisoners just as Bergdahl was and should be recognized as "innocent tourists" and not penalized further for venturing into dangerous territory.

"They really and truly believed that if people were loved and treated with respect that that would be given back to them in kind," said Linda Boyle, Boyle's mother. "So as odd it as it may seem to us that they were there, they truly believed with all their heart that if they treated people properly, they would be treated properly."

Relatives describe the couple, who wed in 2011 after meeting online, as well-intentioned but naive adventure seekers.

They once spent months traveling through Latin America, where they lived among indigenous Guatemalans and where Boyle grew a long beard that led some children to call him "Santa Claus." The couple set off again in the summer of 2012 for a journey that took them to Russia, the central Asian countries of Kazakhstan, Tajikistan and Kyrgyzstan, and then to Afghanistan.

With plans to return home in December ahead of Coleman's due date, they checked in regularly via email during their travels - expressing in their writings an awareness of the perils they faced.

The communication abruptly ended on Oct. 8, 2012, after Boyle emailed from an Internet cafe in what he called an "unsafe" part of Afghanistan. The last withdrawals from the couple's bank account were made Oct. 8 and 9 in Kabul. Two months later, an Afghan official told the AP that the two had been abducted in Wardak Providence, a rugged, mountainous Taliban haven.

New hope emerged last year when an Afghan man who said he had Taliban connections contacted James Coleman, offering first audio recordings and, later, the two email video files. Though the man said the recordings had been provided by the Taliban, he did not reveal what, if anything, the captors wanted and has not been in touch with the Colemans for months.

Meanwhile, the Boyles and Colemans regularly send letters in an effort to reach their children through a non-governmental organization, but haven't received a response. The Colemans live in Stewartstown, Pennsylvania; the Boyles live outside Ottawa.

The families have not received any ransom demands and there are no clear signs of motive for their being held, but officials say the mere fact they were Westerners in hostile territory may have been reason enough. Joshua Boyle was previously married to the sister of Omar Khadr, a Canadian man who spent 10 years at Guantanamo Bay after being captured in 2002 in a firefight at an al-Qaida compound in Afghanistan, but U.S. officials discount any link between that previous family tie and his capture. One called it a mere coincidence.

Two U.S. law enforcement officials described the investigation, speaking only on condition of anonymity because the probe is still underway.

The videos, each under two minutes long and featuring the couple seated in spare settings before cloth-draped backgrounds, contain no apparent clues - such as distinctive ethnic music - that might help investigators identify captors or locale. The videos do contain time stamps - one says May 20, 2013, the other Aug. 20, 2013 - but officials say those notations can easily be manipulated.

U.S. officials say the videos, in their low quality and lack of detail, bear some similarities to those the Taliban released about Bergdahl. They caution that while the videos establish beyond doubt that the couple were captured, they do not qualify as proof of life since there's no mention of current events that could help establish the time.

In addition to calling for government help, the couple in the videos recite names of their family members and certain contact information.

"Just seeing her and seeing her face and hearing her, while it was very difficult, it was also something that relieved a lot of ambiguous anxieties and the fears," said Coleman's mother, Lyn.

Caitlan Coleman refers to her child in the videos, but no child is shown - a fact one U.S. official said was concerning. The grandparents say they don't know the name or gender of the child, who would be about 18 months old.

Even as he holds out hope, James Coleman frets about his daughter's health and a grandchild born into captivity in a foreign country.

"It's an event that just stands out. I think it cries to out to the world, 'This can't be. These people must be let go immediately," said James Coleman.